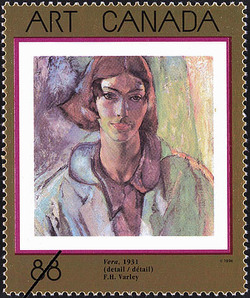 Complex, sensitive, fiery, confident and analytical, artist Frederick H. Varley came to Canada in 1912 on the advice of friend and fellow-painter Arthur Lismer. Both were raised on the same English town, studied at the same Académie in Belgium, and became commercial artists for Grip Limited in Toronto. Together with J.E.H. MacDonald and Franklin Carmichael, the four made a commitment to paint northern landscapes. Later, they joined A.Y. Jackson, Franz Johnston and Lawren Harris to form the Group of Seven. As much as Varley like landscapes, he had a desire to paint people, moods and situations. After a stint in France during World War I, Varley returned hoping to produce a large-scale mural depicting the realities and atrocities of War. Lack of funds doomed the project. Disillusioned with Canada, only his portrait work persuaded him to stay. During the 1920s its was trend within the elite to have personal portraits painted by up-and-coming artists. One of his best portraits, the subject of this stamp, was painted while Varley was in Vancouver. Entitled "Vera", the 61 x 50.8 cm oil on canvas, is housed at the National Gallery of Canada, a 1968 bequest by Vincent Massey. Vera Weatherbie was an 18-year-old student whom Varley met in 1927. He painted this portrait in 1931. He used what was called the Munsell colour system, with complementary tones and colours "to create spheres reflecting the aura of the sitter". Combining this with his interest in Eastern art and religion, Varley developed a unique sense of spiritual values to colours. He equated blue-green with the highest state of spirituality; emerald green with purity; cobalt blue with majesty and mystery; red with earthy and base qualities. "Vera", with dominant greens modified with blues, reds and ochres, is really two portraits in one. Notice how the left and right side of Vera's facial expression differ. The right side with its warm ochres is soft, vulnerable, almost pensive, as it moves to more complex mixtures of green on the left, suggesting a daring, aggressive personality.