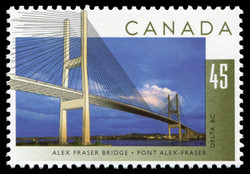 Four stamps are being issued September 1, 1995, commemorating the World Road Congress to be held in Montreal, September 3 to 9. The stamps depict bridges in a variety of designs, built in various parts of Canada during different time periods. Bridges provide important routes of transport in Canada. CAPEX'96, the World Philatelic Exhibition taking place from June 8 to 16, 1996 at the Metro Toronto Convention Centre, will be featuring the theme of "transportation," and the CAPEX'96 logo appears in the selvage of the Bridges stamp pane. The greater Vancouver area is hemmed in by the mountains and the Strait of Georgia. When the Province ordered the new Annacis Highway System south of the city, engineers were once again faced with bridging the Fraser River. The B.C. Ministry of Transportation and Highways handed the problem to CBA Buckland and Taylor, a Vancouver firm of design engineers. They proposed a light, cable stayed bridge with a main span of 1,525 feet, then the longest of its type in the world. Fan-shaped formations of cables, attached to the two 154.3 metre towers would support the deck while sand islands would protect the towers from ship impacts. The engineers prescribed modular elements to reduce time and costs. Construction started in March 1984, and opened for traffic in September 1986. Costs were considerably lower than on comparable projects. Connoisseurs of engineering were so impressed with the project that it was honoured with a Canadian Consulting Engineering Award in 1987.

Designed by Tiit Telmet. Designed by Joseph Gault. Based on a photograph by Richard Robitaille.