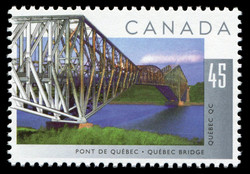 Four stamps are being issued September 1, 1995, commemorating the World Road Congress to be held in Montreal, September 3 to 9. The stamps depict bridges in a variety of designs, built in various parts of Canada during different time periods. Bridges provide important routes of transport in Canada. CAPEX'96, the World Philatelic Exhibition taking place from June 8 to 16, 1996 at the Metro Toronto Convention Centre, will be featuring the theme of "transportation," and the CAPEX'96 logo appears in the selvage of the Bridges stamp pane. The Quebec Bridge was a product of early railway rivalry. In 1902, the Grand Trunk Railway of Montreal decided to become a transcontinental by expanding lines to the Pacific, while using existing track from Montreal to Portland, Maine. The Laurier government wanted the line to pass through Quebec City with an eastern terminus in the Maritime Provinces. Prime Minister Laurier agreed that the federal government should build the section from Winnipeg to Moncton via Quebec City, where a bridge would cross the Saint Lawrence. Engineers decided to build a cantilever rather than a suspension bridge. Both provided long distances between supports, but the former was more solid when carrying heavy weights. A road for cars was not included, as no one thought the automobile would amount to very much! In August 1907, engineers noticed some distortions in the southern structure but due to a communications mix-up, work continued. At 5:37 pm on August 29, 1907, 12,000 tons of steel collapsed. Some 100 workers went down the bridge; of these only 24 survived. The Royal Commission which followed determined that design flaws doomed the bridge. The Commission further noted that temporary measures could not rectify the problem, and a higher quality of steel should have been used. In 1908, it was decided to reconstruct the bridge as an essential part of the railway. Engineers devised an improved cantilever design, and in 1911, a building contract was awarded to the St. Lawrence Bridge Company, a consortium of Dominion Bridge and Canadian Bridge. On July 28, 1916, the cantilevers for both sides of the river were completed. The centre section was moved from Sillery to the bridge site on September 11, 1916. Shortly after workers began to hoist the centre section into position, it plunged into the river, killing 13 people - in full view of 100,000 spectators. The following year, all went well as 100,000 spectators again attended to watch the attempt to raise a new centre section. It was bolted into place on September 20, 1917. The longest (1800 feet) cantilever bridge in the world was finally complete! It is still regarded as an engineering marvel.

Designed by Tiit Telmet. Designed by Joseph Gault. Based on a photograph by Richard Robitaille.