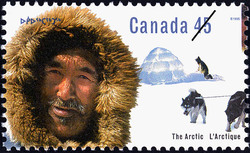 The Canadian Arctic is the subject of a 10-stamp booklet being issued on September 15, 1995. The five se tenant designs commemorate the 50th anniversary of the Arctic Institute of North America. The Arctic Circle consists of northern parts of Alaska, the Yukon, the Northwest Territories (NWT), Greenland and Iceland. The northern extremes of Norway, Sweden, Finland and Siberia also lie within the Arctic Circle. The treeline marks the limit of trees latitudinally on plains, or altitudinally on mountains. Some tree species do grow above the treeline, but only as shrubs. In Canada, the treeline begins in the Yukon, north of the Arctic Circle, about 25 km from the Beaufort Sea in the Herschel Island area. From there it travels through the NWT, crosses the Arctic Circle and heads into Manitoba, Ontario, Quebec - just below the Ungava Peninsula - and into Labrador. Exploration of Canada's Arctic began with the search of a Northwest Passage, and such famous explorers as Frobisher, Hudson, Davis, Bylot and Baffin all ventured North. In the 1940s, the Royal Canadian Mounted Police ship St. Roch navigated the Northwest Passage in perhaps the last great exploration feat of Canada's Arctic. The Yukon Gold Rush (circa 1896) brought prospectors, but that boom soon dwindled. During the Second World War, fears of a Japanese invasion focused new attention on the North. The 1943 construction of the Alaska Highway, running from Dawson Creek to Fairbanks, Alaska, helped end the isolation of the Arctic region from the rest of Canada. After the war, tensions with the USSR kept Canada strongly committed to Arctic research, and both military and scientific interests continue to remain strong. During the 1970s, oil and natural gas exploration caused another developmental mini-boom. Today, the mining of gold, silver, copper, lead, zinc, tungsten, cadmium, bismuth, coal and asbestos remains important in the Northwest Territories and the Yukon. The Arctic Institute of North America (AINA) was created in 1945 to promote the objective study of Arctic conditions and problems. From the outset, AINA has had two main priorities - research and communication. In 1976, headquarters were moved from Montreal to Calgary, and in 1979 Canadian and American members formed two separate corporations. Research has changed and broadened. From almost exclusive research in the 1950s and 1960s on natural and physical sciences, today there is growing emphasis on the social sciences, law and humanities. Equally important, research no longer proceeds without the input and involvement of those who live in the North. The Institute has helped to increase knowledge available about the North, and foster awareness of northern issues. Perhaps the greatest achievement of the Arctic Institute has been its effort to treat the North as a community and integral part of Canada, not simply as a distant geographical location. About two-thirds of Canada's 25,000 Inuit live entirely in the Arctic regions, where they are a majority of the population. "Inuit" means "people", ans this word from their language, Inuktitut, is now commonly used instead of "Eskimo". Their ancestors arrived about 1050 AD, coming from the Bering Strait coast of Alaska. They were still migrating southward when they encountered Viking colonists in Greenland and Labrador. The Inuit way of life developed in almost complete isolation, and their first recorded meeting with English-speaking people was in 1576, when Martin Frobisher ventured into Arctic waters. Over the years, the Inuit guided various explorers and were later employed by European and American whalers as hunters, guides and crew. In return from their services, the Inuit received food, firearms, and tools. A traditional way of life was rapidly changing, particularly with the beginning of the Second World War. The outside world began to move in on the Inuit, bringing items like radio, television, schools, social programs, political and other movements to their way of life.

Based on photographs by Sherman Hines.