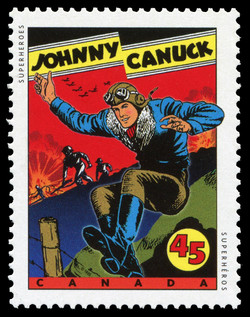 What do Superman, Nelvana of the Northern Lights, Johnny Canuck, Captain Canuck and Fleur de Lys have in common? For one thing, they're all super heroes sprung from the wondrous pages of comic book; and for another, they're all the marvelous creations of Canadian talent. On October 2, these five super heroes will find new adventure in a booklet of 10 stamps from Canada Post Corporation, to be issued in conjunction with Stamp Month 1995. Johnny Canuck was a hero without super powers. He was strong, brave and had a good right hook - and he was created almost by accident! In 1941, John Ezrin of Bell Features saw a 16-year-old browsing through some comic book at a newsstand. The boy, Leo Bachle, was critical of the artwork and drew action scene on the spot. Impressed, Ezrin asked him to dream up a character for next morning. That night, Johnny Canuck - the second Canadian national super hero - was born! Johnny Canuck served on the front lines during the Second World War as an air force captain and secret agent who worked with partisans and guerilla forces. Unfortunately, like Nelvana, patriotic Johnny was unable to survive the onslaught of U.S. comics coming into Canada after the war. From Krypton to the Arctic, to Second World War battlefields and the Montreal Forum, Canada's super heroes have fought our country's enemies and never failed. And in delighting readers for some 50 years, they have given the world uniquely Canadian heroes.