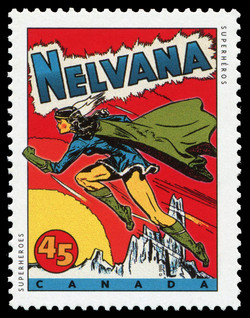 The hidden date for this stamp can be found near the bottom edge of the stamp. What do Superman, Nelvana of the Northern Lights, Johnny Canuck, Captain Canuck and Fleur de Lys have in common? For one thing, they're all super heroes sprung from the wondrous pages of comic book; and for another, they're all the marvelous creations of Canadian talent. On October 2, these five super heroes will find new adventure in a booklet of 10 stamps from Canada Post Corporation, to be issued in conjunction with Stamp Month 1995. The success of Superman spawned a multitude of super heroes. However, they all disappeared from newsstands in Canada when the December 1940 War Exchange Conservation Act stopped these "non-essential" publications. Responding to the perceived needs of Canadians, Adrian Dingle created Nelvana of the Northern Lights, and she became Canada's first national super-heros. Nelvana was originally the concept Group of Seven painter Franz Johnston. After returning from an Arctic trip, he spoke of the legend of Nelvana, the offspring of a mortal mother and the god Koliak, King of the Northern Lights. Dingle modified the concept so that Nelvana could fly, traveling at the speed of light along a ray of the Northern Lights. Predating Wonder-Woman, Nelvana fought the Axis Powers, super-villains, and even "swarms of savage, starved Manchurian wolves"! Nelvana's final appearance was in May 1947, shortly after the return of American comics to Canada after the Second World War ended. From Krypton to the Arctic, to Second World War battlefields and the Montreal Forum, Canada's super heroes have fought our country's enemies and never failed. And in delighting readers for some 50 years, they have given the world uniquely Canadian heroes.