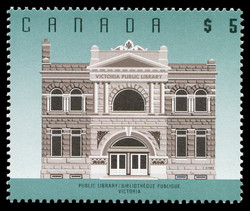 The hidden date for this stamp can be found along the right edge of the building. The stately Carnegie Building at the corner of Yates and Blanshard Streets in Victoria, British Columbia will be featured on the sixth stamp in Canada Post's Canadian Architecture series. Built as a prestigious home for the Victoria Public Library in 1904 with a grant from steel magnate Andrew Carnegie, the Carnegie Library was originally designed by Thomas Hooper (1857-1935), in collaboration with his partner C. Elwood Watkins (1875-1942). The imposing edifice is a fine example of the bold Richardsonian Romanesque style of architecture. That style, featured in many public buildings of the day, incorporated rough stonework, massive arches and turrets in a balanced, symmetrical composition inspired by the 12th-century Romanesque architecture of southern France. In 1979, the Carnegie Building was given Heritage designation and in the early 1980s its new patron, West Coast Savings (now Pacific Coasts Savings Credit Union), restored and renovated the buildings to its late Victorian charm. The Romanesque Revival on architecture consisted of two completely different phases. Examples of the early phase appeared in Canada in the 1840's. It was similar to the Gothic revival style, drawing inspiration from mediaeval architecture. The second phase emerged in the 1880's and was identified with the work of renowned Boston architect Henry H. Richardson. An example of early Romanesque Revival style is University College of the University of Toronto (built 1856), and well-known Richardsonian Romanesque building is Montreal's Windsor Station (built 1888-1889). Countless Canadian post offices and custom houses also exhibit the Richardson touch. Montreal designer Raymond Bellemare, assisted by Toronto architect Robert G. Hill, worked from early photographs and original plans of the Victoria Public Library. Bellemare then produced meticulous computer-generated line drawings of the building. Next, he carefully added various colours and tones then removed the drawn lines. The result is a five-colour computer-generated stamp showing the building from full-front ground-level view. This beautiful stamp will be issued as a $5.00 high-value definitive, and is scheduled for issue on February 29, 1996, replacing the $5.00 Bonsecours Market, Montreal stamp released in 1990.