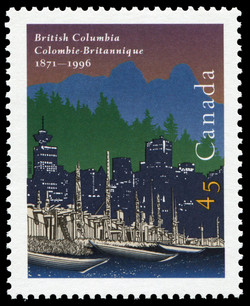 British Columbia is a land of incredible natural beauty. Its snow-capped mountains, narrow fjords, coastal rainforests, sagebrush cattle-country and salmon-filled rivers are the stuff of picture postcards. Natural wonders, however, are only part of its riches; British Columbia is also Canada's third most populous province, bustling with delightful cities and vibrant small towns. This year, our most westerly province celebrates the 125th anniversary of its entry into Confederation, and a new stamp release commemorates the event. Although it is difficult to imagine a Canada without British Columbia, it was no certainty that this province would enter Confederation at all. Indeed, in the 1860s, many residents of the colony wished to join with their trading partners in the United States, while many others wanted to leave the colonial status quo unchanged. A promise by the Dominion Government to complete a transcontinental railway within ten years, however, did much to sway public opinion. On July 20, 1871 British Columbia entered Confederation. A century and a quarter later, what was once an extremely "British" province is now a show-place of ethnic diversity and multi-culturalism. As Canada's link to the nations of the Pacific Rim and chosen home for many Canadians looking for gentle weather, British Columbia has developed into a province of unique culture and achievement. Among its many celebrated attractions are Canada Place, University of British Columbia, the BC Lions, the Vancouver Canucks, Simon Fraser University, numerous provincial and national parks, 225 golfs facilities, cattle ranches, fruit orchards, forestry operations - and yes, tea at the Empress Hotel. Designed by Herrainco Design Associates Inc. of Vancouver - their first for Canada Post - the stamp features a silhouetted collage of elements important to the history and development of the Province. Blue waters of the Pacific serve as a landing for Haida canoes at the coastal village of Skidegate as it appeared at the time of Confederation. Totems stand before a darkened night skyline of modern Vancouver and, just behind, thick forests of Douglas fir and cedar stretch towards the sky. Designer for the project, Matt Warburton, says: "We used quintessential BC colours. The stamp has a lot of the deep blues and mauves you see in a West Coast sunset." This evocative domestic-rate stamp will be released on 19 July, 1996.