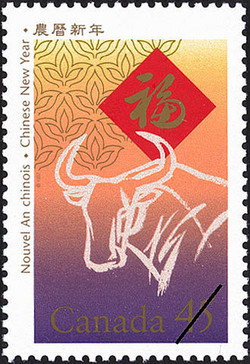 Cancellation Location: Vancouver BC
Add to

As the sun goes down on February 7th, so ends the Year of the Rat. In the days prior to the last sunset of the Chinese calendar, Chinese-Canadians across the country will ritually clean their homes to banish the malevolent spirits. They will cook meals for the days to come and families and friends will join together to lay the way for a new year. When the sun has fully set, the Year of the Ox begins. The traditional Chinese lunar year begins at sunset on the day of the second new moon following the winter solstice and is marked by fifteen days of celebrations, culminating at the first full moon of the year. Festivities commence with foods and rituals meant to invoke good luck, prosperity, good health and longevity. Apples are for peace, oranges for wealth, and the lotus seed for fertility. At midnight, firecrackers explode in the streets to give the bad spirits their final send off. Families stay awake through the night, eating, talking and reaffirming their family ties. New Year's Day is a family affair devoted to feasting and good cheer. On the second day, married women visit their paternal homes, bringing along their husbands and children. Shops and businesses reopen on the fifth day, and life returns to normal. On the fifteenth day, celebrations end when costumes of lions and dragons dance through the street during the famous Lantern Festival. In Canada, these traditions may be slightly adapted depending on the individual communities but the importance of reconfirming the Chinese heritage remains the same. As Canada moves into 21st century, the contribution of Chinese-Canadians to our wonderful country has never been greater. Canada Post has chosen to join with this vast and vital community in celebrating the Year of the Ox. A special 45¢ stamp has been designed by two Chinese-Canadians artists and it will be issued on January 7th in conjunction with the Hong Kong Postal Administration and the People's Republic of China. Chinese immigrants first arrived in search of gold in 1858. They founded the first Chinese community in Canada at Bakerville, just south of Prince George in British Columbia. The majority of these gold seekers came from Guangdong province, an area between Canton and Hong Kong. The Chinese community remained small until the 1880s, when 15,000 men were brought into the country under contract to work on the B.C. section of the Canadian Pacific Railway. When the transcontinental railway was completed in 1885 many of these men returned to China, went to the USA, or moved to other parts of Canada. Restrictive government policies of the early part of this century prohibited further major immigration and it was not until 1947 that these restrictions where relaxed. To understand the phenomenal contribution to Canada of the Chinese-Canadians one need only look at the prosperity of the areas in which they have settled in the last 25 years. In the last four years alone nearly 200,000 Chinese have entered Canada, making a national community of almost 800,000 Canadians with Chinese heritage. Whereas their communities in Vancouver and Toronto used to be concentrated in certain districts, Chinese-Canadians now live side-by-side with the other cultural groups that make up the rich brocade of this country. Across the world, 750 million Chinese - one seventh of the earth's population - will celebrate the Year of the Ox. The Chinese zodiac is based on a 12-year cycle within a calendar system that has existed for over 5000 years. Each year is ascribed an animal character, and within the year are twelve months divided in parts of 15 days. The names of these 15 day periods are poetic descriptions of the weather, fauna and flora that occur during those periods. "Excited Insects", "Clear and Bright", "Slight Heat", "Hoar Frost Descends" are but name of few. The Chinese calendar is the longest unbroken calendar system known to us. It remains in use to this day because it is considered sacred. The official calendar was presented to the emperor, governors, and other dignitaries in an elaborate ceremony each year on the first of the 10th month. Any changes were tightly controlled by imperial authorities and the penalty for illegally tampering with the time keeping system was death. Featured prominently on the stamp is a brush drawing of an ox. Above the ox is a red-coloured diamond-shaped image, inside of which is the Chinese character "fu"- which means "good fortune", "happiness", "well-being", and "absence of hardship". Red and gold, the main colours on the stamp, are the traditional colours used by Chinese for celebrations and to denote happiness, good luck and wealth. The stamp is available in a pane of 25 stamps, as well as in a Two-stamp souvenir sheet. An uncut press sheet will be issued on February 7, 1997 to celebrate the day of Chinese New Year.