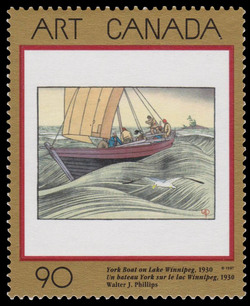 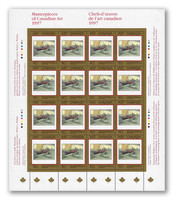 The newest in the "Masterpieces of Canadian Art" series features a delightful woodcut print, entitled York Boat on Lake Winnipeg, by Walter Joseph Phillips (1884-1963). Phillips was one of the first artists to import the Asian woodcut process to describe the Canadian landscape. Born in England, Phillips emigrated to Canada in 1913, selecting Winnipeg as his home. He taught art at St. John's Technical High School and made weekend excursions to the rural areas. As a young artist, he began with watercolours, moved to etching, and then desired to meld the two genres by creating coloured prints using wood blocks. In 1924 he went to England to learn from master printmakers including the man who Phillips considered the "most important living technician" in colour woodcuts, Yoshijiro Urushibara. Taking his new-found skills back to the Canadian prairies, Phillips applied the woodcut process in expressing the solid, vast landscape. His works struck a profound chord in viewers and were widely sought. In 1926, Phillips published his Technique of the Colour Woodcut, and he was one of very few artists of the period who could make a living from art. His work, publications, and his teachings in Winnipeg, Calgary and Banff influenced many artists across Canada. Phillips's 1930 woodcut print, York Boat on Lake Winnipeg, depicts a group of men in a small boat that seems to thread itself through churning waters. The yellow sail is filled with wind and Phillips gives the boat a wonderful sense of force by grace of his lines. It is an exhilarating piece for the viewer. Phillips's hybrid of Asian and European styles is imposed upon a fresh and threatening landscape. There is both a sense of tension and freedom. Whether it was his intention or merely his instinct, Phillips produced a visual metaphor of modern Canada. Michael J. Gribbon of the National Gallery of Canada, who once organized a travelling exhibition of Phillips's work, wrote that "in his watercolours, and most especially in his colour woodcuts, he crystallized an atmospheric essence uniquely Canadian. Consequently, Phillips's oeuvres, whether in publications or as works of art, cannot be dismissed lightly. They must be recognized for what they are - a significant factor in the evolution of the Canadian graphic arts". The National Gallery of Canada holds two copies from this 150-print run. Additional copies are to be found in other major Canadian collections. The "Masterpieces of Canadian Art" stamp series has included artists such as Alfred Pellan, Bill Reid, Emily Carr and Tom Thompson. Pierre-Yves Pelletier designer of the series, has reproduced Phillips' work with a six-colour, litho process, and given it a gold-foil frame. This lovely stamp will be issued in panes of 16 stamps on the 17th of February, 1997, and the Official First Day Cover (OFDC) cancellation will take place in Winnipeg. Art is a natural diplomat that brings diverse peoples and cultures together. It is fitting that the Masterpieces of Canadian Art series be featured on the 90¢ international stamp.