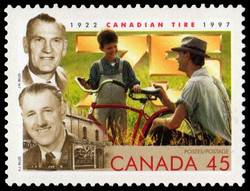 Booklet of 12 Stamps (with descriptive booklet)

Canadian Tire is perhaps one of the best known chains of retail stores across the country. This year, the company celebrates its 75th anniversary as a hardgoods retailer in Canada, and as an active supporter of community events and safety-awareness programs from coast-to-coast. In honour of the occasion, Canada Post will issue a single domestic rate commemorative stamp on March 3. The story of Canadian Tire actually began in 1922 when a pair of brothers, J.W. and A.J. Billes, took out space on the corner of Hamilton and Gerrard streets in Toronto and opened Hamilton Tire and Rubber. They sold home-made antifreeze, batteries and, yes, tires. Moving twice in the next year, they settled on Yonge Street and by 1927 had opened two branch stores within the city. That same year, they incorporated under the name Canadian Tire and began distributing mail-order lists throughout southern Ontario and into New York State to attract customers. Now a staple of Canadian households, the first Canadian Tire catalogue appeared in 1928. A success, Canadian Tire continued to grow, opening its first associate store in Hamilton during some of the hardest days of the Great Depression. The 24-page catalogue of 1934 proudly declared the company to be the "largest direct automotive supply house in Canada, a 100 percent Canadian company". Forty-five stores were added during the subsequent war years, and a specialized distribution centre was built on Sheppard Avenue in 1956. Two decades later, the first of 20 auto parts depots opened in Scarborough. The A.J. Billes Distribution Centre commenced operations in 1991 - this facility is reputed to be the largest automated storage and retrieval system of its kind in the world. As it expanded, Canadian Tire relentlessly sought to provide top-quality goods and excellent, efficient service. It was the first company to guarantee its tires for other than manufacturing defects, and in 1937 converted a vacant supermarket on Yonge Street into an immense counter-service outlet, where clerks were outfitted with roller skates to speedily retrieve merchandise from stock. 1958 saw the introduction of what would become the company's hallmark feature: the cash bonus coupons affectionately known as "Canadian Tire Money". Rewarding customers for their purchases, these popular coupons remain in use to this day. The retail division of Canadian Tire now operates 424 stores across the country, dealing in everything from auto parts and service to housewares, sporting goods, and leisure equipment. Canadian Tire Petroleum is the largest independent gasoline retailer in Canada, with roughly 200 outlets and 25 Pit StopTM quick lube stations in Ontario. In addition to handling customer credit accounts, insurance and financial packages, Canadian Tire Acceptance manages a roadside assistance program for the Canadian Tire Auto Club. Motomaster, the company's house brand, is the nation's leading line of auto replacement parts, batteries, motor-oil, and antifreeze, and is Canada's top-selling brand of replacement tire. Understanding that its success is due to the support and patronage of communities across the country, Canadian Tire endeavours to give something back by sponsoring local events, bike rodeos, and other program related to child safety. Canadian Tire's street-proofing message has reached more than 14 million children through classroom instruction, police visits, parents, community groups and store events. Taking on the responsibility of promoting safety, the company created the Canadian Tire Child Protection Foundation, a body which funds two major programs: "Stay Alert. Safety Stay"TM and "Canadian Tire Cycle Safe". The first teaches children to identify and avoid dangerous situations, while the second is a course of instruction in bicycle safety. "Learn Not to Burn"(R) is a more recent undertaking, a fire-prevention program directed toward primary and elementary school students. Capturing the chain's history and character, this celebratory issue features portraits of founders J.W. and A.J. Billes and depicts one of their first stores. The central image - a father presenting his son with a new bicycle, for many, will evoke real-life memories of happy surprises and good times.