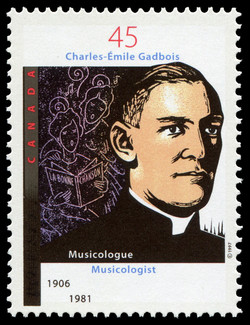 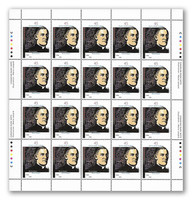 Energetic, passionate and resourceful, Abbé Charles-Émile Gadbois was a man of many callings: Catholic priest, music teacher and champion of French language and culture. His published collections of French-Canadian folk songs found their way into nearly every Quebec household, selling roughly thirty million copies. In conjunction with this year's Semaine de la francophonie, which runs from March 16 to 22, Canada Post Corporation is proud to issue a domestic rate commemorative stamp honouring Abbé Gadbois. His appreciation of music began early on in childhood when he learned to play piano. After choosing to become a priest, he continued his musical studies at the Grand Séminaire de Montréal. There, Gadbois took lessons in trumpet, clarinet, harp, and what proved to be his favourite instrument, violin. Ordained in 1930, he took up teaching music at the Saint-Hyacinthe Seminary near his home town of Saint-Barnabé. Gadbois believed that through song, the culture of French Canada could best be appreciated and preserved; Monseigneur Camille Roy, rector of Laval University and organizer of the second Congrès de la langue française, persuaded him that by promoting French-language songs one might counteract the overpowering influence of English and American popular music. Thus, Gadbois began to gather and publish folk songs - at first only for the benefit of his students, for whom he hoped to provide a new piece each week. The hand-copier in the Seminary basement served his purpose well enough; that is, until other schools and convents started asking to receive his material as well. Soon equipped with an electric copier, he set a goal of publishing fifty songs per year for five years, and extended his collecting through French Canada, French-speaking regions of New England and eventually, in 1938, Europe. He named the publishing enterprise La Bonne Chanson. By 1950, he had produced 10 books containing, in total, 500 pieces of music. Gadbois included a wide variety of material: laments, ballads, folk songs, lullabies, serenades, operatic airs, military and religious songs, rounds, and poems set to music. In October 1938, the Comité catholique du Conseil de l'instruction publique recommended using La Bonne Chanson collections in its schools. At the end of the year, Gadbois' subscriber list was 10,000 names long. RCA Victor took an interest in the priest's endeavour and eventually produced sixty-eight records of his compiled songs. Gadbois organized festivals where the music was publicly performed. He wrote more than one hundred hymns and songs himself, often under the pseudonyms Paul Arel or DO-MI-SOL. The stamp featuring Abbé Charles-Émile Gadbois was designed by Marie Lessard of Montreal, and depicts both the man and his work: the right-hand portion of the image is filled by a head-and-shoulders line drawing of Gadbois, while to the left a small group of people sings from a Bonne Chanson songbook. Gadbois and his legacy are simultaneously represented together, at once noble and charming. It is certainly appropriate to use the word "legacy", for today la Fondation Abbé Charles-Émile Gadbois continues to promote French culture in North America, ensuring that French songs will be sung in homes, schools, and at public events for many years to come. Established by Gadbois' brother, Raoul, in 1986, the foundation was created five years after the Abbé's death. It annually awards bursaries to young musicians and singers selected through an auditioning process at the University of Montreal's Faculty of Music. Every September, a concert is performed by recipients in the amphitheatre of the maison mère de la Congrégation de Notre-Dame in Westmount. The Gadbois stamp goes on sale on March 20, 1997. The Official First Day Cover will be cancelled in Ottawa.