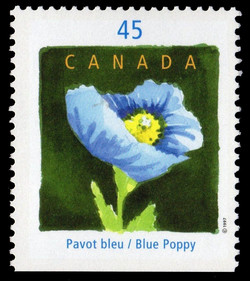 Since 1809, when the first Salon des fleurs attracted spectators to Belgium's Frascati Garden, only one of nearly two hundred international horticultural exhibitions held around the world has been on Canadian soil. That will change this spring with Québec en fleurs 97, a magnificent floral festival taking place in Quebec City from April 4 to 13. To celebrate this rare and important occasion, Canada Post Corporation will issue a single domestic rate commemorative stamp on the opening day of the event, with an Official First Day Cover cancelled in Quebec City. Canada's previous horticultural exposition - Les Floralies of Montreal in 1980 - was the first event of its kind to be held in North America, and was celebrated by Canada Post with the release of two stamps, one coinciding with the festival and the second a year later in 1981. North America's only other such exhibition took place in Columbus, Ohio in 1992, marking the 500th anniversary of Christopher Columbus' arrival in the New World. Clearly, Québec en fleurs 97 is a significant event, continuing a tradition that is nearly two centuries old, yet which remains a special occasion on this side of the Atlantic. Much as architecture combines the scientific rigour of engineering with the imaginative art of design, so horticulture fuses botany and art into a creative undertaking that has become a billion-dollar industry in Canada; Québec en fleurs 97 will provide Canadian horticulturists an opportunity to share their ideas and accomplishments with colleagues from several nations. Hosted by the Société des floralies internationales de Québec (a non-profit organization affiliated with the Fédération interdisciplinaire de l'horticulture ornementale du Québec), together with the Centre de recherche en horticulture de l'Université Laval, the festival will require seven days of set-up in the new Quebec Convention Centre. It is anticipated that 50,000 visitors will attend Québec en fleurs 97, viewing displays by award-winning horticulturists from around the world. The show's designers plan to arrange exhibits along the course of a mythical river, meant to evoke the St. Lawrence with its rich banks and fertile plains. In addition to providing a meeting-place for professionals and amateur enthusiasts, this exposition will emphasize the beauty and fragility of natural systems, promoting the importance of carefully maintaining and protecting our environment. Organizers hope, too, that through their exposure to the splendours of the plant kingdom, young visitors will learn to enjoy and admire the fascinating world of horticulture. A central feature of floral exhibitions has always been the introduction of new species and hybrids of plants. Many of today's most beloved flowers made their first public appearance at such events - the double-flowered camellia, for instance, as well as begonias, azaleas and orchids. In 1997, Canada will present a new flower : the De Montarville rose. An upright rose tree of the Explorer series, the De Montarville grows to height of approximately one metre and is plentiful flower-bearer from June right through to the end of September. Named after the founder of the city of St. Bruno, Quebec, it was developed by Agriculture and Agroalimentaire Canada, Horticultural Research and Development Centre at Saint-Jean-sur-Richelieu at its L'Assomption experimental farm. The De Montarville's dark red buds gradually pale, blossoming into bright pink flowers measuring between 7 and 7 ½ cm in diameter. Each comprises twenty-five petals. The glistening green leaves of this hardy plant turn to yellow in autumn. An exceptional event and international showcase for Canadian horticultural talent, Québec en fleurs 97 truly deserves commemoration on a stamp from Canada Post. This issue goes on sale April 4, 1997. The stamp is elegantly designed, featuring a five-colour lithograph entitled, Pavot bleu / Blue Poppy, which has been reproduced from a watercolour painting of the blue poppy (Meconopsis betonicifolia) by Sainte-Foy artist Claude A. Simard. M. Simard's work has previously appeared on Canadian stamp issues including the Christmas stamps of 1983 and 1987.

Designed by Claude A. Simard.