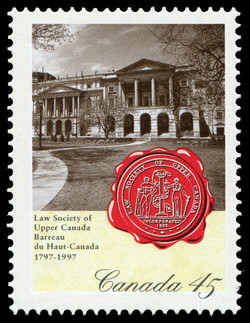 The hidden date for this stamp can be found in one of the building's arches. 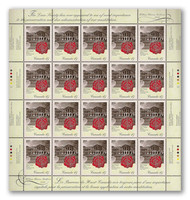 Although the region once known as Upper Canada has long since adopted the name of Ontario, the Law Society of Upper Canada has never changed its name. Steeped in Canadian history, the original name still reminds lawyers and laymen of high ethnical standards to which the profession of law must adhere. The Law Society is the institution that forms and regulates those who serve their province and country as lawyers. There are now many Law Societies across Canada, but the Law Society of Upper Canada is the oldest, having been established in 1797. In July of that year, ten of Upper Canada's sixteen licensed lawyers met in Niagara-on-the-Lake. On that day, they formed an association with a mandate to "see that persons seeking admission to the legal profession were competent, and to ensure lawyers followed proper procedures and behaved ethnically". That was 200 years ago, and Canada Post takes immense pleasure in issuing a single domestic rate (45¢) commemorative stamp in this bicentennial year of the Law Society of Upper Canada. Depicted on the stamp is Osgoode Hall, the Society's distinguished home in Toronto, Ontario. The stamp's designer, Les Holloway, has produced a design with weight and formality, imbued with the importance of its subject. Mr. Holloway explains, "Yellowed parchment, handwritten script and red wax seals are all typical of 19th-century documents I came across at the Law Society archives. I wanted every aspect of the stamp design to exude age and authority". The stamp's image of the neoclassical facade of Osgoode Hall is carefully enhanced with a seal bearing the emblem of the Law Society of Upper Canada. This seal is cleverly rendered with a glossy varnish during the printing process to give the illusion of an actual official seal in three dimensions. It was a design that required much consideration, for the Society is an institution integral to our culture and history. The Law Society of Upper Canada now counts 27,000 members, the largest bar in the country. It continues to fulfill its original mandate and also provides continuing education and professional advice to lawyers, publishes the decisions of Ontario's court and maintains the province's law libraries. The Society administers a fund to rectify situations where citizens fall victim to dishonest or incompetent lawyers. In addition, the Society provides services to the public such as the "Dial-a-Law" line with recorded legal information on a variety of subjects. The Law Society of Upper Canada still resides in the dignified splendour of Osgoode Hall, a building named after the first chief justice of Upper Canada, William Osgoode, and designated a national historic site in 1979. It is of particular note that Osgoode Hall is one of the few historical structures still in the hands of its original owner. Osgoode Hall once served as the principal academy for the legal profession in Ontario and produced some of this country's sharpest minds and greatest statesmen. In 1957, the Society recognized and approved existing law schools at the University of Toronto, the University of Ottawa and Queen's University. Programs were later approved at other Ontario universities as well. In 1968, Osgoode Hall ceased altogether to operate as a place of learning, and the Law Society of Upper Canada lent the Osgoode Hall Law School name to York University. The building itself has seen many additions and modifications but the gardens which skirt the Hall have remained formal, pristine and a source of enjoyment for Torontonians.

Designed by Les Holloway Based on a photograph by Robert White