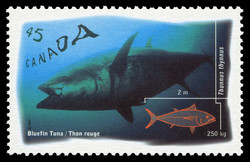 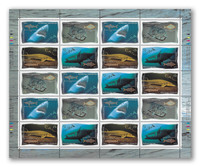 Upon his return to England in 1497, John Cabot reported that fish were so abundant in the waters of North Atlantic (of what is now Newfoundland), one could fold up the nets and retrieve a catch by simply dipping a basket into the sea. By the 16th century, hundreds of ships and thousands of men were drawn by the North American cod and whale fisheries. The fish brought the fleets that resulted in the settlement of Newfoundland and the establishment of numerous villages in the Maritimes. Since then, fishing has remained a vital industry in Canada, and the fish who inhabit our ocean waters have become part of our heritage. Celebrating that heritage, our new Ocean Water Fish stamps celebrate four of the creatures that swim the waters off the Canadian coastline. Collectors will be interested to know that the official first day cover for the Ocean Water Fish stamps will be postmarked in Alberton PEI - the site of the largest great white shark caught in Canadian waters, measuring 5.26 metres in length. Marking a splash on the issue day of May 30, 1997 in a set of four domestic-rate stamps are the great white shark, bluefin tuna, Pacific halibut and Atlantic sturgeon. Ocean enthusiasts of all ages will be impressed with the realism of these stamps. The 1997 Ocean Water Fish stamp design is by Q30 Design Inc. of Toronto, whose earlier stamp work includes the Holocaust stamps and the High Technology stamp set. The selection of the fish was a difficult task but even larger challenge came from the decision to use actual underwater photographs. Although it was extremely difficult to find underwater photographs that were sharp and clear enough to be reproduced in postage stamp size, the design team knew that photography was the best way to convey the qualities of the fish. And the results are stunning. Another large fish from Atlantic Canada is the bluefin tuna (Thunnus thynnus). It is one of the twelve members in the family of mackerels and tunas. It can weigh as much as 910 kg and reach lengths of over 4 metres. The bluefin is distinguished by its large size, short pectoral fins, absence of stripes, and variations in the dorsal fins. Found in the warmer waters of Atlantic Ocean, the bluefin ranges from Newfoundland and southern Labrador to the West Indies and, in the eastern Atlantic, from Norway to the Mediterranean. Great travellers, bluefin adults are found in schools of fewer than fifty and swim near the surface, frequently jumping clear of the water. They come to Canada from as far away as the Gulf of Mexico and the Straits of Florida. The bluefin possess the unusual ability to maintain a body temperature of 10°-15°C warmer than that of the seas in which it swims, allowing it to move into the colder Canadian waters in search of fish stocks. To do this, it must consume up to 25 percent of its own weight each day. The bluefin feeds on schooling species such as herring, sauries, capelin, lanternfish, barracudinas, mackerel, hakes and squid, and is the prey of killer and pilot whales. Caught by purse seine, trapnet and longline, the bluefin is canned or sold fresh. Fishing for bluefin is also a favorite of deep-sea anglers.