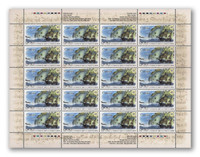 This spring, an historic anniversary will be observed on both sides of the Atlantic Ocean. Five hundred years ago John Cabot, born in what is now known as Italy, set sail from Bristol, England. Nearly two months later, on June 24, 1497, he stood upon the soil of what is now the east coast of Canada. In celebration of this momentous voyage, a commemorative stamp will be issued jointly by Canada and Italy. Sharing the same rich, evocative image of Cabot's ship at sea, the Canadian and Italian designs differ in their details: each bears the name of the country of issue and is printed in the denomination of that nation's currency.

John Cabot was born Giovanni Caboto in Genoa in the middle of the 15th century. Drawn to the sea, he became an experienced sailor and navigator. After many years of travelling the Mediterranean, he moved to England with his family and there anglicized his name to Cabot. The merchants of Bristol held him in high regard as a pilot and man of adventurous spirit - a spirit reflected in his desire to seek out new worlds of opportunity across the vast expanse of the unexplored ocean. With the support of Bristol's merchants, Cabot petitioned King Henry VII for royal assent to conduct an expedition to discover previously unknown territories and possibly a route to the Orient. Christopher Columbus had already made his famous journey across the Atlantic under the Spanish flag, and King Henry was eager to see that England was not left behind. He granted Cabot's wish, issuing approval in letters patent.

Early in May, 1497, Cabot and his crew of eighteen to twenty men departed Bristol aboard the Matthew. Traversing the harsh Atlantic, they arrived, finally, somewhere between Labrador and Cape Breton Island on Canada's eastern coastline. The exact location remains unknown. Cabot rowed ashore and staked a claim in the name of England's King, opening the way for England to conduct further exploration and to declare in future, a right to North American territory. Of course, Cabot did not know that he had arrived in North America. Rather, he assumed he had made his way to some distant Asian shore, and upon returning to England professed to have done just that. King Henry awarded him an annual pension of twenty pounds - quite a fortune in those days - and gave permission for Cabot to undertake a second voyage (the restless traveller was determined to sail westward all the way to Japan).

The moment of this discovery is captured with quiet drama on this new stamp issue. Artfully designed by Susan Warr of Halifax, Nova Scotia, its colours have a fittingly antique appearance, evoking the passage of five centuries since Cabot made his voyage. Beneath a wet, grey-blue sky swept with pale clouds, the Matthew cuts across a dark, rough sea. One can almost hear the flap of its tall sails and the creak of its timbres. In the distance, a black cape rises above the waterline. Looming in the background is a map - specifically that region of coastline visited by Cabot - facing Europe across the wide Atlantic. In pale figures at the centre of the stamp's image is the year of Cabot's venture, 1497. The lower border of both the Canadian and Italian versions of the stamp describes the event in three language: Cabot's Voyage, Le Voyage de Cabot, Il Viaggio di Caboto. Collectors can join in the celebration of the anniversary of Cabot's voyage on June 24, 1997, when this stamp will be jointly issued with Italy. Both the Canadian and Italian stamp will be available through the National Philatelic Centre.

Based on an illustration by Bonnie Ross. Based on a photograph by James Steeves.