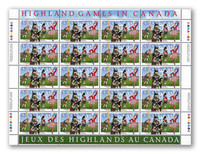 Originating nearly 4,000 years ago, the Highland Games are a celebration of traditional Highland culture - a mixture of track and field competitions, Highland dancing performances, and piping and drumming extravaganzas. Communities across Canada continue to pay tribute to this important part of our nation's ancestry with their own Highland Games celebrations. In honour of the 50th anniversary of the Glengarry Highland Games held annually at Maxville, Ontario, Canada Post will issue a single domestic-rate commemorative stamp on August 1.

The Highland Games are believed to have originated with athletic contest in County Meath, Ireland. Gaelic-speaking Scots likely brought the tradition to Scotland, where it took on the unique flavour of the Highland way of life. Encouraged by clan chiefs, who had a vested interest in the physical prowess of their men, the Games quickly spread throughout Scotland. They were an integral part of life in the Highlands for centuries until the fateful Battle of Culloden in 1746, a bloody conflict in which a thousand Highlanders perished and the clan system was destroyed.

Thereafter, the wearing of kilts and the playing of pipes in the Highlands became criminal offences. To retain these beloved cultural traditions, some Highlanders emigrated to new lands, while others joined the British army. The first Highland Scots to arrive on Canadian soil were part of 17th century attempts to establish colonies on Cape Breton Island and at Port-Royal (Annapolis Royal). Permanent Scottish settlements were not planted until the 1750s and 1760s. Between 1770 and 1815, about 15,000 Highland Scots arrived, settling mainly in Nova Scotia, Prince Edward Island and Upper Canada. Emigration continued throughout the 19th century, to the Atlantic, the west and to Ontario.

The Glengarry Highland Games at Maxville, site of the North American Pipe Band Championships, are known as the world's largest Highland Games. They are one of at least 20 annual Games celebrations held today in Canada which date back to the early 1800s. One of the characteristic features of the Highland Games is the sound of the bagpipe and drums, played beneath the open sky amid a colourful array of military uniforms and veterans' medals. At each Highland Games, massed bands with hundreds of players offer musical displays to exuberant crowds, while others compete in the spectacular pipe band march championships. Judges evaluate the synchronicity of band members and the uniformity of pitch. Solo pipers and drummers compete in individual events - for strathspey and reel, march, piorbaireachd ("piping" or "act of piping") and drumming march.

Along with the music of the Highland Games is the traditional dance. Originally, Highland dances were celebrations of victorious battles, performed only by men. The Sword Dance was likely performed over the body of a slain opponent, and the Highland Dance is said to have been started to "amuse a lad until his father returned from the wars". Today's dances are, of course, strictly ceremonial and are performed mainly by young female dance competitors.

The Heavy Events are the Highland Games' test of brawn. Men typically measuring at least six feet tall and weighing between 200 and 350 lbs. challenge their muscular strength in six events. In the Stone Throw, they hurl a 25-lb. rock shot-put style. In the 28-lb. and 56-lb. Weight Throws, they use a one-handed throw to heave an iron block with an iron ring attached. For the 16-lb. Hammer Throw, they propel a round metal ball with a wooden handle, and for the 56-lb. weight toss, they attempt to launch the weight over a pole vault. Those brave enough attempt the Caber Toss, an event which involves tossing a 22-foot-long spruce log weighing about 125 lbs. Contestants must shoulder the caber, run with it, and toss it so that it turns end-over-end and lands pointing in a specified direction.

The Highland Games commemorative stamp offers a collage of images representative of the Highland Games. Designed by Fraser Ross of Halifax, his first stamp creation for Canada Post, its rectangular form features four images set against a backdrop depicting the setting of a Highland Games celebration - a green grassy field bordered with crowds of Games enthusiasts.