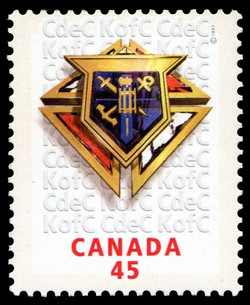 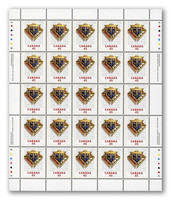 The Knights of Columbus is a Catholic fraternity with a proud history. The name "Columbus" is in honour of Christopher Columbus, the Catholic explorer. To be a Knight of Columbus is to uphold the knightly ideals of spirituality and service to church, country and humanity. Canada Post takes great pleasure in honouring the Knights of Columbus, an organization that played an important role in bonding Canadian communities together, seeing to the welfare of families and building this young country.

In towns large and small, from coast to coast, the Knights of Columbus now boast 1,725 councils with over 200,000 members in the ten provinces of Canada. In 1997, the Order is celebrating its first hundred years in Canada. Founded in New Haven, Connecticut in 1882 by an Irish-American priest, Father Michael J. McGivney, the organization was intended to give Roman Catholic men a place to help them "remain steadfast in their faith through mutual encouragement; to promote closer ties of fraternity among them; and to set up elementary system of insurance so that widows and children of members in the group who might die would not find themselves in dire financial straits." In the 19th century, much of North America was still being colonized. Medical services were not readily available for settlers who often came from Europe with little more than the clothes on their backs and dreams of working and raising their families in a new land. Even well into the 20th century, families suffered greatly at loss of the male bread-winner. The insurance plan initiated by McGivney has been the saving grace for many families and communities in North America and around the world. It has consequently evolved throughout the 20th century into an extensive life insurance program with nearly $20 billion of insurance in force and over $3 billion in assets, ranking in the top five per cent of life insurance companies in North America.

The Order of the Knights of Columbus was brought to Canada in 1897 by two Montrealers, J.P. Kavanaugh and Charles Smith. Having been initiated to this Roman Catholic organization in the United States, Kavanaugh and Smith enlisted the aid of Dr. J.J. Guérin, a former mayor of Montreal and provincial minister in Quebec. Together, they built Council No. 284 in Montreal under the name Council Canada. And it was Dr. Guérin who became Canada's first Grand Knight. The movement marched across the country at a rapid rate. In 1899, a council started up in Quebec City and a second was founded in Montreal. By 1905, the Knights of Columbus had a presence in Ottawa, Kingston, Cornwall, Sherbrooke, Charlottetown, Saint John, Sydney and in Newfoundland. In 1953, the Quebec Order of the Knights of Columbus was officially named "L'Ordre des Chevaliers de Colomb".

The stamp bears the Order's emblem and incorporates the official colours of the Knights of Columbus - blue, white, yellow and red. Blue represents God, protector of the Earth, while also symbolizing hope, peace and confidence. White is the colour of innocence, simplicity, candor and purity of intent. Yellow represent the wealth obtained through work, and red is symbolic of courage, devotion to duty and heroism in the fight to defend Christian faith. The stamp will be issued on August 5, 1997 in connection with the annual international convention of the Order of the Knights of Columbus, to be held in Montreal.