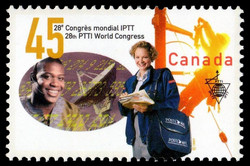 The hidden date for this stamp can be found to the right of the postal worker's bag. 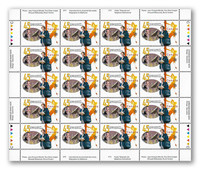 One of the most important labour movements of the communication age is embodied in the Postal, Telegraph and Telephone International (PTTI). From August 18 to 22, the City of Montreal will play host to the 28th World Congress of PTTI. In keeping with a stamp-issue tradition that was started in Belgium in 1966 at the 19th World Congress, Canada Post is proud to present this domestic-rate stamp. The Official First Day Cover will be cancelled in Montreal on the first day of the Congress.

Founded in 1911 by the postal, telegraph and telephone unions in six European countries, the PTTI has expanded to incorporate broadcasting, electrical and other groups of workers. The PTTI, now in 117 countries, represents some 4.5 million workers in communications and related industries. These workers are largely responsible for quick and exciting advances in how humans interact on global scale. The PTTI started in Bern, Switzerland.

Although initial momentum was great and, by 1922, membership from sixteen countries had grown to half a million, tensions in Europe during the 1920s and 30s caused serious setbacks to the movement. Germany, Austria, Czechoslovakia and Italy withdrew their postal unions. Britain ended its membership following a government ban on international affiliations for public servants. By year 1939, when war broke out, membership had been severed in half. Only 205,000 members held the torch through the war. After the war, the PTTI was revitalized. Communications systems had been greatly improved and new technologies had developed during the war. A global economy was in its infancy. Humans were only just beginning to communicate across social, political and geographic boundaries on a mass scale. As a result, national postal services, telegraph, telephone and radio services were expanding. Membership grew to half a million within a year after the war, and by the 1950's, the PTTI had a presence in Asia, Africa and Latin America.

In 1965, with three million members, the PTTI appointed its first full-time General Secretary. Today, with a head office in Geneva, Switzerland and offices around the world, member unions range in size from a German affiliate representing half a million workers to a union in Monserrat with fewer than 100 members. The most recent nations to join the movement include Poland, the Czech Republic, Slovakia, Bulgaria, Romania, Hungary, Albania and Mongolia.

The rapid pace of change and varying technologies of communications are represented in this first stamp designed by the Montreal company, Epicentre. In Canada, PTTI member unions include the Canadian Union of Public Employees, the Public Service Alliance of Canada, the Telecommunications Workers Union, The Canadian Labour Congress and the "Fédération des travailleurs et travailleuses du Québec".

The following is a list of stamp issues commemorating previous PTTI conferences and congresses: