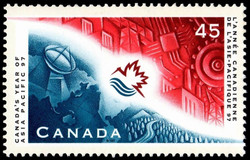 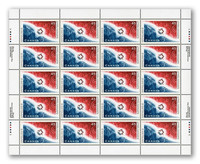 Against the backdrop of dream-like collages of icons depicting key trade issues - technology, the environment, natural resources and more - we see a dry-brush line drawing reminiscent of Asian calligraphy. These are the images of a stamp honouring 1997 as Canada's Year of Asia Pacific (CYAP) to be issued on August 25, to coincide with the opening of tehe APEC Energy Ministerial Meeting in Edmonton. The two halves of the stamp, tinted in official CYAP colours, meet at the line drawing which represents the CYAP logo, "to reflect the spirit of international cooperation behind this initiative", says designer Ken Fung of Ken Koo Creative Group in Vancouver.

The elements of the logo within convey the significance of 1997 as Canada's Year of Asia Pacific: The Canadian maple leaf floats above an image of waves representative of the Pacific Ocean and merges with the outline of a crane, an Asian symbol of peace and longevity and a creature which travels without boundaries symbolic of geographic unity. The logo was developed through a federal government project created to involve youth in Canada's Year of Asia Pacific. Over 100 entries were gathered, but it was the design developed by Amy Ho, a first-year student of Kwantlen University College's Graphic and Visual Design Program in Richmond, BC that garnered the $1,500 prize. Ms. Ho's design will be used on posters, displays and all other materials produced for CYAP events and activities to be staged across the country this year, as well as being featured on this commemorative stamp which Canada Post is proud to issue.

Prime Minister Jean Chrétien designated the year 1997 as Canada's Year of Asia Pacific because of Canada's important role as this year's Chair of the Asia Pacific Economic Cooperation (APEC) Economic Leaders' Meeting, one of the most significant international trade events in the world. Formed in 1989 with Canada as one of its founding members, APEC is the official economic organization of the Pacific Rim. It has evolved into a key agenda-setting body for trade in the Asia Pacific region. It currently consists of 18 members: Australia, Brunei, Canada, Chile, China, Chinese Taipei, Hong Kong, Indonesia, Japan, Malaysia, Mexico, New Zealand, Papua New Guinea, Philippines, Republic of Korea, Singapore, Thailand and the United States.

Chairing the Forum represents a tremendous opportunity for the Canadian government and industry to advance national trade interests, strengthen Canada's presence in the Asia Pacific, create jobs and growth domestically and expand Canada's global influence. APEC economies are important trading partners for Canada. Four of Canada's top 10 export markets and 11 of our top 25 export markets are APEC members. In fact, APEC economies now consume half of our nation's total exports to markets outside the United States. The Asia Pacific region is also an important source of investment and new technology for Canada. Japan is our third-largest source of direct investment (valued at $12 billion in 1995) and our second-largest source of portfolio investment ($43.5 billion in March 1996). Other Asia Pacific economies such as Hong Kong, Australia, Singapore and the Republic of Korea are also major investors in Canada.

As Chair of this year's APEC forum, Canada will welcome over 2,500 business and political decision makers from all 18 participating APEC economies to a series of meetings which will explore, discuss and address key issues related to trade in the Asia Pacific region. To complement APEC business events, an array of CYAP youth and cultural events will also be staged.