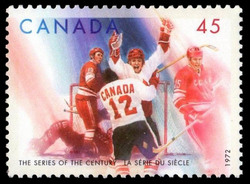 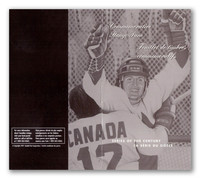 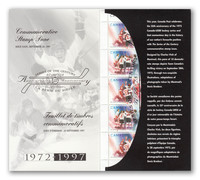 "There were four Russian players in the zone, but none of them saw Henderson behind them or picked up Phil Esposito, who was surging towards the net. Both Liapkin and Vasiliev went for the loose puck, while Yakushev and Shadrin moved up ice. Vasiliev tried to clear the zone, but the puck rolled off his stick. Esposito intercepted the puck and fired a shot toward the net. By this time Henderson had picked himself up off the ice, picked up Esposito's rebound [and] fired the puck at Tretiak. The Soviet goalkeeper got a toe on the shot but lost his balance as he made the save. Henderson pounced on the rebound and dribbled the puck under a prone Tretiak just as Liapkin reached him. Somehow, Henderson and Esposito had out-manoeuvred four Soviet defenders to give Canada a 6-5 lead with just 34 ticks left on the clock".

NHL officials chose Harry Sinden to coach the Canadian team. Sinden had guided the Boston Bruins to the Stanley Cup title in 1970 and was captain of the Whitby Dunlops, who had defeated the Russians and captured the World Championship in 1958. Named "Team Canada", the Canadian players sported vibrant red-and-white jerseys featuring an exploding maple leaf design. The team was introduced to the public on July 12. A month later, training camp opened at Toronto's Maple Leaf Gardens. Armed with players like Esposito and Henderson, Team Canada was still subject to one restriction: all players had to come from NHL, which excluded such hockey greats as Bobby Hull, Derek Sanderson and J.C. Tremblay who were under contract with the World Hockey Association at the time.

To assess the ability of their opponents, Team Canada sent the coach of Toronto Maple Leafs and his chief scout to the USSR to observe the Soviets in action. As Dan Diamond writes, they returned unimpressed with what they had seen. The Soviets had weak shooters incapable of taking proper slapshots, they said. Only one player from the USSR squad seemed strong enough to qualify for the NHL. The Russian goaltender was young, with poor reflexes and slow glove hand. The defensemen were slow and telegraphed their passes. They broke out of their zones slowly and would be no match for any NHL forechecker. Finally, everything the Soviets did seemed calculated. They proceeded deliberately and would not be able to withstand the pace of an NHL-style game. The Soviets' strength, however, lay in the basic skills: skating, endurance and conditioning. Their strategy, conceived by Anatoli Tarassov of Central Army Team, was based on military tactics and featured an all-out offensive attack. According to Diamond, Tarassov noted that NHL professionals were probably better than the Soviets in shooting, goaltending, body checking and stick handling, but believed that the Soviets were better at team play, speed and "mental toughness".

Expecting a shutout, Canadians were shocked when Russia beat Canada 7-3 in the series opener in Montreal. Two days later, Team Canada redeemed itself with a 4-1 win in Toronto, but faltered again in Game 3 in Winnipeg with a 4-4 tie. The Canada run concluded with a disappointing 5-3 win for the USSR in Vancouver. And so Team Canada set out for the Soviet Union with only one win in its favour. The opening game in Russia, held September 22 in Moscow, brought no relief: the Soviets took it 5-4. With only three games remaining, Team Canada seemed to face certain defeat. Another loss would give the series to the Soviets; so would a tie, on the basis of goals scored. Canada needed to win all remaining games.

Under this tremendous pressure, Team Canada rallied to tie the series with two narrow wins: 3-2 on September 24 and 4-3 on September 26. The eighth game was critical. With the largest Canadian television audience on record watching, the two teams faced off. The Soviets quickly scored two goals. At the end of the second period, they lead 5-3. Then Phil Esposito and Yvan Cournoyer tied the game. With 34 seconds remaining, Paul Henderson took two stabs at a rebound from a shot by Esposito and scored the most famous goal in Canadian hockey history - winning the game and the series for Canada!

Greeted by the Prime Minister in Montreal, the players returned to a crowd of thousands of cheering fans. The win was narrow but the victory was great! As Dan Diamond concludes, "In the end, two factors gave Canada its narrow victory over the Soviets in the 1972 series. One was the Canadians' overarching pride in their game and country and that unmeasurable intangible called the Canadian heart". Soviet forward Alexander Yakushev may have put it best: "There is something that is missing in Europeans in general, and in the Soviets players in particular. It's called fighting to the very end. It's a special trait of Canadian hockey."

This year, Canada Post celebrates the 25th anniversary of the 1972 Canada-Soviet hockey series and that momentous day in the history of our nation's favourite pastime with "The Series of the Century" commemorative stamp issue. Designed by Charles Vinh of Montreal, this set of two domestic-rate stamps depicts Team Canada's thrilling victory exquisite illustrations, adaptations of photographs taken by Montreal's Denis Brodeur.

This stamp, unveiled earlier this year, features the immediate aftermath of the all-important goal. Sports hero Paul Henderson raises his arms in jubilation against the backdrop of the Russian team net.