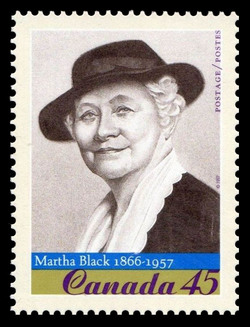 Arm raised, finger pointing emphatically as he delivers an impassioned address, it is a telling portrait of eminent Canadian Réal Caouette. This image is depicted on one of the four domestic-rate stamps created to honour the lives and achievements of prominent federal politicians. In conjunction with what would have been Caouette's birthday, Canada Post will issue these commemorative stamps to recognize the contributions of Caouette and three other Canadian politicians who enriched the character of our nation: Martha Black, Lionel Chevrier and Judy LaMarsh.

Born in Chicago in 1866, Martha (Munger) Purdy first travelled to Canada's north during the Klondike gold rush. She returned to the Yukon in 1901 to open a milling business to support herself and her three children from her first marriage. Three years later, she wed George Black, a New Brunswick-born lawyer. While in England with her husband during the First World War, Martha was awarded the Order of British Empire for her efforts in aiding Yukon servicemen, and became a fellow of the Royal Geographical Society for her work with Yukon flora. Following the war, George returned to Conservative politics. In 1921, he was elected as a federal member for the Yukon, and was Speaker of the House of Commons during R.B. Bennett's administration. In 1935, however, ill heath prevented him from seeking re-election. It was at this time that Martha Black would make her way into the Canadian history books - she took her husband's place as the Conservative candidate. At the ripe old age of 70, she campaigned across Yukon, often by foot. When the ballots were cast, Martha became the second woman ever elected to Canada's Parliament. Martha Black died in 1957. In the "Canadian Encyclopaedia", Margaret Carter notes, "Martha Black had style and spirit; northerners appreciated these qualities and made her a legend."