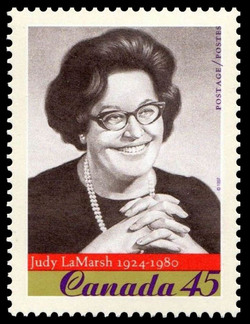 Arm raised, finger pointing emphatically as he delivers an impassioned address, it is a telling portrait of eminent Canadian Réal Caouette. This image is depicted on one of the four domestic-rate stamps creted to honour the lives and achievements of prominent federal politicians. In conjunction with what would have been Caouette's birthday, Canada Post will issue these commemorative stamps to recognize the contributions of Caouette and three other Canadian politicians who enriched the character of our nation: Martha Black, Lionel Chevrier and Judy LaMarsh. Born in Chatham, Ontario, Judy Verlyn LaMarsh was the daughter of a criminal lawyer who was an ardent Liberal.

Growing up in Chatham and Niagara Falls, LaMarsh was drawn to politics and law and, following wartime service with the Canadian Women's Army Corps, entered the University of Toronto. She attended Osgoode Hall Law School and, in 1950, went into law partnership with her father. Active in the Niagara Falls Liberal organization and president of the Ontario Women's Liberal Association, LaMarsh entered parliament in a 1960 by-election during a period when the Liberals were in opposition. When the Liberals returned to power in 1963, LaMarsh was named Minister of Health and Welfare. In this administration, she introduced the Canada Pension Plan Bill and began work on a national health plan, but was soon named Secretary of State with responsibility for Canada's 1967 centennial celebrations. In this new role, she initiated internal reform in the Canadian Broadcasting Corporation and tabled a Broadcasting Act. After resigning in 1968, LaMarsh hit the speaking circuit, hosted a television show and an open-line program, and published a memoir and a novel. She died in 1980 at the age of 55.