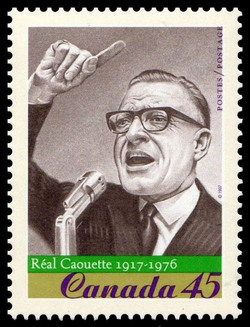 Arm raised, finger pointing emphatically as he delivers an impassioned address, it is a telling portrait of eminent Canadian Réal Caouette. This image is depicted on one of the four domestic-rate stamps created to honour the lives and achievements of prominent federal politicians. In conjunction with what would have been Caouette's birthday, Canada Post will issue these commemorative stamps to recognize the contributions of Caouette and three other Canadian politicians who enriched the character of our nation: Martha Black, Lionel Chevrier and Judy LaMarsh.

Réal Caouette is best remembered for his fiery oratory and his effective use of television. A devout federalist, Caouette strongly opposed the idea of Quebec independence and supported official bilingualism and multiculturalism. He was born Joseph David Réal Caouette in 1917 in Amos, Quebec, a small town in the Abitibi region about 75 km north-east of Rouyn-Noranda. In 1939, Caouette, an automobile dealer, joined the Social Credit Movement. He later became leader of the Quebec-based Social Credit affiliate party, the Créditistes. In this post, he took 26 seats and 26 percent of Quebec's popular vote in the 1962 federal election. Robert Thompson's Social Credit party, allied with Caouette's Créditistes and with a combined total of 30 seats, held the balance of power in a Conservative minority government. In 1963, Caouette broke with Thompson and formed his own party, the Ralliement des créditistes. It had strong support from rural and small-town ridings in Quebec and, in 1970, entered provincial politics under the leadership of Camille Samson, who won 12 seats in Quebec's National Assembly. The party only survived on the provincial scene until 1973 when it was eliminated by a Liberal sweep. The federal Créditistes disappeared in 1980, just four years after Caouette's death.