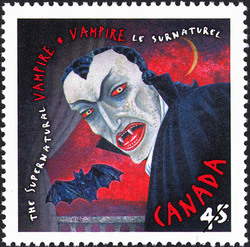 It's a chilling image - sharp white fangs, opaque eyes and a jet black robe. Depicted with his well-known counterpart, the bat, the vampire is one of the supernatural figures celebrated in this stamp set. Vampires are mysterious part of the myth, folklore and literature of many countries around the world. Nestled asleep in their coffins by day, they arise as the sun disappears and the sky turns to black. Transforming into bats to take flight, they travel in search of victims and suck the warm blood from their throats. In turn, these hapless prey become vampires. Only one exposure to a crucifix, garlic, or sunlight can ward off these evil bloodsuckers. And only a stake driven through their heart can exterminate them.

Do vampires really exist? "It is hard to believe that a phenomenon, which has had so complete a hold over nations both old and young, has not some underlying and terrible truth", writes Reverend Montague Summers, who made a lifelong study of vampirism. One of the oldest vampires we know celebrates his 100th birthday this year: Bram Stoker's "Dracula". Stoker's novel is generally considered the first significant full-length fictional prose novel work on vampirism in the English language. A sensation upon its publication, it remains in print today and has been translated into numerous languages. The most famous vampire is one who lurked on Hollywood movie sets - Bela Lugosi's Dracula. Tall, pale, exquisitely attired in evening wear and dark cape, Lugosi's Dracula character has thrilled and delighted moviegoers and TV viewers since his first appearance in 1930 in Tod Browning's "Dracula". Revivals of the gothic theme hit the big screen in the 1990s. Francis Ford Coppola released "Bram Stoker's Dracula" in 1992 and Tom Cruise played the fanged lead in the 1993 movie "Interview with the Vampire".