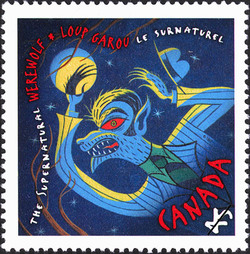 Numerous stories of werewolves are found within Canadian folklore, especially among our Native people and in French Canadian culture, which is rich in tales of the "loup-garou". In Edith Fowke's "Folktales of French Canada", we can read "The Loup-Garou of the Cemetery", the story of a man who is said to have roamed the cemetery by night with his pack digging up the dead and devouring their corpses. In another collection of legends collected by Steven Freygood entitled "Headless George and Other Tales Told in Canada", we can read the Inuit tale of the "Childless Werewolves" in which an Inuit couple are robbed of their only son by a jealous werewolf, his wife and his pack of friends. Werewolves have also appeared in Robert W. Service's "The House of Fear" and Alan Sullivan's story "The Eyes of Sebastien" in "Under Northern Lights", his collection of tales of the North.

A chilling rival for the vampire, the werewolf has had an illustrious movie career as well. Four years after the debut of Bela Lugosi's Dracula, Hollywood introduced the "Werewolf of London" with Henry Hull, but the 1941 "Wolf Man" featuring Lon Chaney Jr. as Larry Talbot, the furry fiend, is probably the all-time favourite in the werewolf genre. The fearful werewolf returned in subsequent films: Oliver Reed's "Curse of the Werewolf" in 1961, and in the '80s, in "Wolfen", as well as "An American Werewolf in London" and "The Howling". In 1994, actor Jack Nicholson starred in Mike Nichols' "Wolf".