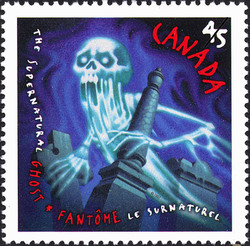 Though tales of vampires are typically dismissed as pure fiction, not so for stories of ghosts. Numerous well-documented, spine-tingling accounts exist across Canada - from Vancouver Island to Newfoundland to the North - but some of the most intriguing tales come from Nova Scotia. Perhaps the best authenticated yarn heralds from Sydney, as recounted in J.G. MacKinnon's 1918 book "Old Sydney". It was October 15, 1785 at exactly 4:00 p.m. Two young officers of the British army, Captain Sherbrooke and Lieutenant Wynyard, sat in Wynyard's apartment. Suddenly, "a tall young man, about 20 years of age, with sunken cheeks and wasted frame. dressed in a light indoor costume" silently entered. He "cast a look of melancholy affection at Wynyard", then passed into the bedroom and disappeared. The only window in the bedroom had been sealed shut for the winter, yet the man had vanished. Wynyard was aghast. Not only because the strange phenomenon he had witnessed, but because the visitor had the appearance of his brother, a soldier then stationed in India. Wynyard feared what this might mean. The dreaded news did not arrive until June 1786: Lt. John Otto Wynyard of the 3rd regiment of Foot Guards had died in India at 4:00 p.m. October 15, 1785 - the exact time of the mysterious apparition. Indeed, Nova Scotia is rich with ghostly tales. As the Reverend John Murray wrote in his "History of the Presbyterian Church in Cape Breton" (1921), "our Celtic forefathers brought with them to Cape Breton. their superstitions regarding witches, fairies, ghosts". The telling of ghost stories "was a common pastime around the big hardwood fire on the old fashioned kitchen hearth".