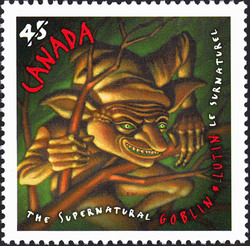 Perhaps less frightening than vampires, werewolves and ghosts, goblins overshadow their fellow spooks in number. Goblins abound across Canada - from Newfoundland's Celtic little people and the Maritimes' brownies and the Will o' the Wisps, to Quebec's "Lutins" and "Feux follets", and the Mohawks' yagodenoyoyas. Brownies, called "baucan" in Nova Scotia, are said to be the largest of the pixies and behave like poltergeists. The Will o' the Wisps, "Feux follets" and yagodenoyoyas are said to be the smallest. Some goblins are friendly, some mischievously playful. Others are dangerous creatures, said to commit evil acts such as stealing babies and replacing them with "changelings". The "Feux follets" are malevolent goblins, said to toss knives and other objects. The "Lutins" are unpredictable characters - some good, some evil. Farmers in the Beauce region of Quebec have been known to build tiny bell towers on their barns to ward off sinister "Lutins".