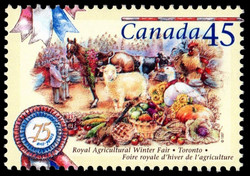 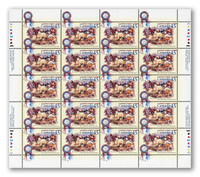 Each fall, yellow school buses filled with bright-eyed children make their way through busy streets to Toronto's Exhibition Place. Here, these youngsters take part in an annual Canadian tradition - the Royal Agricultural Winter Fair. This farmers' fair has become a favourite field trip for urban children. Here, they learn about farm life and animals, and get their fingers sticky with freshly made fudge.

A showcase for the best of Canadian agricultural products and technologies, the Royal Winter Fair has grown exponentially over its three-quarters of century - from the first year, when it drew 17,000 entries from several provinces and the United States to its livestock competitions, to the 1996 Fair, when in excess of 325,000 attendees, including exhibitors, competitors, international visitors and members of the general public visited. Show officials recount that last year's 12-day Fair, "over 3,000 head of cattle, 1,300 horses, 1,600 birds, 500 sheep, 300 goats and 300 pigs" were on display along with "world championship field crops, giant vegetables and many more agricultural products, educational exhibits and feature attractions".

For decades, agricultural exhibitions have provided a forum for farmers to display new equipment, discuss new trends and showcase their wares. According to the Canadian Encyclopaedia, agricultural exhibitions likely began as bazaars and fairs. North America's first such fair was held in Nova Scotia in 1765. Deriving much of their character from the agricultural fairs of England and Scotland, Canadian exhibitions and fairs provided social and educational opportunities and helped to improve agriculture through competition. By the end of the nineteenth century, most communities in Canada had their own local agricultural fairs with prizes for the best livestock and crops, and for excellence in domestic activities such as spinning and butter making. Often, new breeds of livestock and newly developed varieties of crops were exhibited.

The Royal Winter Fair is Canada's best known agricultural fair at the inter-provincial or national level. Originally planned for 1921, the grand opening of the Royal Agricultural Winter Fair was delayed when a heating system could not be installed in time. The first show opened on Toronto's Canadian National Exhibition (CNE) grounds on Nov. 22, 1922 and, except for the years during World War II, has been held annually ever since. Unlike many other fairs, the Royal is a purely agricultural show; it features no midway. Held in November after all other agricultural fairs have ended, it draws competitors from across Canada and around the world; at one recent show, over 60 countries were represented either as competitors or buyers. Over the years, the Royal has expanded and taken on additional roles. In 1965, the federal Department of Agriculture, a long-time sponsor, introduced significant changes. The number of livestock classes for each breed and the number of entries per breeder were reduced, new judging standards were set emphasizing the utility of the breed, buildings were modernized, and the Winter Garden Show and Horse Show assumed new prominence.

Part of the Fair since its opening, the Royal Horse Show is the third and final leg of the North American Fall Circuit and offers prizes money in excess of $525,000. A popular component of the Fair, Horse Show organizers say that "heavy horse hitches, coaching carriages, hackneys, road horses, hunters, jumpers, ponies and special features entertain 75,000 attending." The highlight is the International Show Jumping Competition. Today, the Royal Agricultural Winter Fair remains a premier show for livestock breeders, but also evolved into an educational forum for school children. This year, the Fair will move into the National Trade Centre located at Exhibition Place where it is to be joined by a large Country Living exhibition.

Available in panes of 20 stamps, the Royal Agricultural Winter Fair stamp will be issued November 6, the opening day of the 1997 fair. The Official First Day Cover will be cancelled in the Fair's home town, Toronto.

Designed by Heather Lafleur Based on an illustration by Shelagh Armstrong