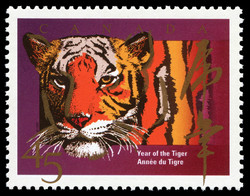 The hidden date for this stamp can be found above the tiger's whiskers. 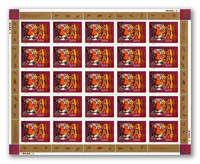 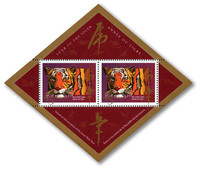 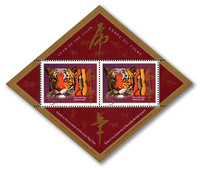 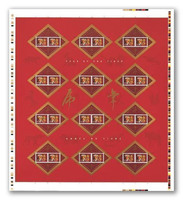 This January 28, Chinese women across Canada and elsewhere in the world will busy themselves scouring their homes in a ritual cleansing - casting out evil spirits. At sunset, they will throw open their windows to release any remaining malevolent beings - and thus, the Year of the Tiger will begin.

For thousands of Chinese-Canadians across the country, this day will mark the beginning of a new year - one that, in keeping with the character of the Tiger, promises to be a wild one. The tiger is one of 12 animal signs in the lunar zodiac. The rat, ox, rabbit, dragon, snake, horse, sheep, monkey, chicken, dog and pig are the others. Each new year in the lunar calendar is named for one of these creatures, following a 12-year cycle, with each said to possess the characteristics particular to the animal for which it was named.

The Year of the Tiger is an explosive one. According to "The Handbook of Chinese Horoscopes" by Theodora Lau, it is a year ear-marked for war, disagreement and disasters of all kinds. It usually begins with a bang and ends with a whimper. Nothing will be done on a small, timid scale. Everything, good and bad, will be carried to extremes. Lunar astrology tells us that, in the Year of the Tiger, fortunes will be won and lost, people will flare all around . "Like the Tiger," Lau writes, "we will tend to charge without thinking and end up regretting our rashness." Other Tiger years include 1902, 1914, 1926, 1938, 1950, 1962, 1974 and 1986. The forecast for 1998 is not all dismal tough, Lau tells us: "the forceful and vigorous Tiger year can also be used to inject new life and vitality into lost causes, sinking ventures and drab or failing industries. It will likewise be a time for massive change, (and) for new and bold, especially highly controversial, ideas".

Lunar New Year celebrations have existed for 2,500 years since the time of the Chinese philosopher Confucius. Today, they continue to be an important element of Chinese culture. Visiting with family is a primary focus. Around the world some 750 million Chinese people gather with family members in what is called "the largest annual migration on the planet" - to revel in old traditions and hope for fortune prosperity. Central to the 15 days of celebration is recognition of the cycle of life which unites all members of the family. Respects are paid to deceased ancestors by adults and youngsters alike. On New Year's Day, all stores and businesses close down. The time is reserved for immediate family and devoted to feasting. Women cook traditional foods, including fish - a symbol for abundance and the granting of wishes. Water is another important symbol in the feast - a source of life and a symbol of wealth. On the second day of New Year celebrations, married women visit their parental homes with their husbands and children. On the fifth day - the day of the god of wealth - commercial life returns as shops and businesses reopen. Celebrations end with the Lantern Festival on the fifteenth day - with the first full moon of the year. Colourful lanterns, often in the form of the appropriate zodiac creature, are displayed and festive parades complete with dancing lions and dragons pour through the streets.

The celebration of the Lunar New Year has grown as a Canadian reality, as more and more Chinese people have settled in this country. The first Chinese community in Canada was founded around 1858 at Barkerville, south-east of Prince George, British Columbia - at the time of the Fraser River gold rush. The majority of these immigrants were from Guangdong province, an area between Canton, China and Hong Kong. The next major wave of immigration was in the1880s when 15,000 men were contracted to help build the British Columbia section of the Canadian Pacific Railway. When the transcontinental railway was completed in 1885, many of these men returned to China, while some settled in the Prairie provinces and Eastern Canada. Today, about one million Chinese immigrants live in Canada - two-thirds in Vancouver and Toronto.

Though Chinese society in Canada has been transformed over the years, many traditional, family values are still maintained - the majority of young, working Chinese continue to give money to support their parents, and many grandparents live with their children. Chinese New Year festivities in Canada, both private and public, give Chinese-Canadians an opportunity to renew their sense of cultural and ethnic identity and connect with past generations.

To commemorate these cultural celebrations, Canada Post is proud to issue a single domestic-rate Year of the Tiger stamp. Designed by Raymond Mah of Vancouver with illustration by Tammi Hall, Gavin Chow and Leigh Bridges, the stamp prominently features the head and shoulders of a tiger - an intimidating image of the fierce cat. Two Chinese characters, meaning "Year of the Tiger", rendered in calligraphy by Leung Hon Kwan, frame the right side of the image. Red is the dominant colour - a Chinese symbol of joy and happiness. Gold accents the artwork - a colour representative of prosperity, happiness, and good luck.