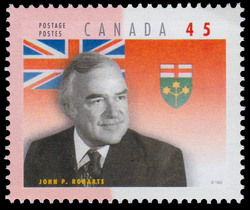 During his decade as Premier of Ontario, John Robarts became a noted defender of individual freedoms and provincial rights. He opposed Medicare when it was first proposed, furthered French education in Ontario schools, and presided over 1967 conference on the Confederation of Tomorrow. Born in Banff, Alberta, Robarts moved to London, Ontario in his teens. After graduating from University of Western Ontario in 1939 and serving in the navy during the war, Robarts studied law at Osgoode Hall. He returned to London and began his political career as a city alderman. He was later elected as a Conservative MPP and joined the provincial Cabinet in 1958. Robarts served as Minister of Education, and then rose to the position of Conservative leader and Premier. Robarts resigned in 1971, but later co-chaired the 1977-79 Task Force on Canadian Unity.