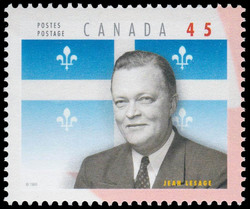 A Montreal-born lawyer, Lesage served with federal Liberal from 1945 until 1957. He held the Minister of Resources and Development post and later managed the Northern Affairs and National Resources portfolio. After the Diefenbaker sweep, Lesage went into provincial politics and became leader of the Quebec Liberals. His party won the 1960 election, ending 16-year reign of the Union Nationale. Thus began the Quiet Revolution, a movement known for its slogan "Maîtres chez nous" - "Masters in our own house", which sought to affirm a unique personality for Quebec. Following is defeat in 1966, Lesage remained the provincial opposition leader until 1970. He died in 1980.