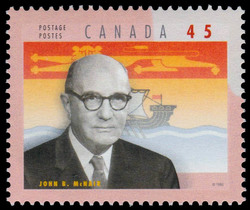 Native to Andover, New Brunswick, John McNair attended the University of New Brunswick, then went to Oxford as a Rhodes Scholar. McNair served overseas from 1916 to 1919 as an artillery officer with the Canadian Expeditionary Force, then returned to New Brunswick to practice law. A Liberal, McNair was first elected to New Brunswick's legislative assembly in 1935 and appointed Attorney General that same year. In 1940, he won the title of provincial Premier and held office until defeated in 1952. Three years later McNair was appointed Chief of Justice of New Brunswick and, in 1965, he became the province's lieutenant governor. Falling ill, McNair resigned in 1968. He died a few months later.