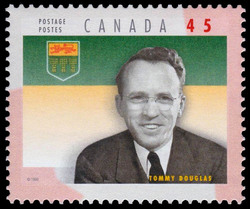 During is tenure as Premier, "Tommy" Douglas ran an efficient government (the first social-democratic government in North America) and pioneered a wide array of social services, including hospital insurance. At the federal level, he fought for the establishment of Medicare, the Canada Pension Plan and bargaining rights for civil servants. Born in Scotland in 1904, Douglas came to Winnipeg with is family in 1910. Douglas, who had witnessed the Winnipeg General Strike, the Great Depression, and tough times on the Prairies, helped found the Co-operative Commonwealth Federation (the CCF). He ran unsuccessfully in the 1934 Saskatchewan election, but won a federal seat for the CCF in 1935. He resigned nine years later to try his luck on the provincial stage once again. He was successful and served as Premier for 17 years. Douglas resigned in 1961 to lead the federal New Democratic Party. He retired as party leader in 1971 but continued in Parliament until 1979. He died in 1986.