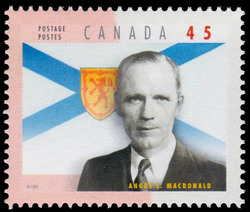 Born in Dunvegan, Cape Breton, Angus L. Macdonald was educated at Saint Francis Xavier, Dalhousie and Harvard Universities. After serving overseas during World War I, he became Nova Scotia's Assistant Deputy Attorney General and then taught law at Dalhousie. Elected leader of the provincial Liberal party, Macdonald became Premier in 1933. He left his post and his native province in 1940 to serve as minister of Defence for Naval Services under Prime Minister Mackenzie King. Macdonald broke with King over the issue of conscription for overseas service. When the Prime Minister triumphed with the conscriptionists, Macdonald resigned from cabinet and returned to Halifax and his role as Premier - to oppose King's centralizing policies. He died in 1954.