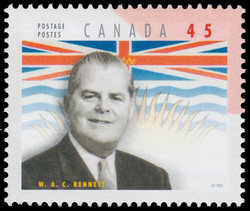 William "W.A.C." Bennett's 20 years in office were ones of enormous growth for the province of British Columbia. Labour unions were curbed, welfare spending limited, and the government run on a "pay as you go" basis. Born in New Brunswick, Bennett moved to Edmonton following World War I military service and moved to Kelowna, British Columbia to establish his own retail chain. Elected to BC legislature in 1941 as a Conservative, Bennett sat as an independent after becoming disenchanted with the Coalition Government of 1947-52. The Social Credit movement, then popular in Alberta, was gaining support in BC although no members of that party sat in the provincial legislature. Bennett studied the theories of Social Credit and in 1952 ran on that ticket - emerging as head of a minority Social Credit government. Obtaining a majority in a 1953 election, Bennett obtained firm control and went on to become the province's longest serving Premier. The "Globe and Mail's" obituary for Bennett said that the Premier "ruled British Columbia with an iron grip of benevolence, transforming the province with massive road-and-trail building programs and two of the largest hydro-electric development projects in North American history."