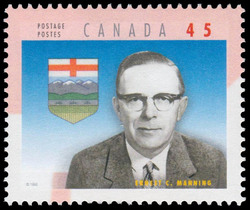 Born in Carnduff, Saskatchewan, Manning grew up in a farm family and went to Calgary to William ("Bible Bill") Aberhart's Prophetic Bible Institute. Aberhart, a Baptist minister well-known for his radio broadcasts of Sunday afternoon services, headed the world's first Social Credit government when he was elected Premier of Alberta in 1935. He brought Manning in as provincial secretary. When Aberhart died in 1943, Manning took over as party leader and Premier. He served from 1943 to 1968, and retired at the peak of power. In 1970, he was named to the Senate. Manning passed on his love of politics to his son, Preston, who became leader of the federal Reform Party and, last year, Official Leader of the Opposition.