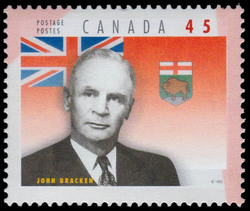 Born in Ellisville, Ontario, Bracken graduated from Ontario Agricultural College. He entered politics in 1920 after serving as a professor at the University of Saskatchewan and as president of the Manitoba Agricultural College. In 1922, at the request of the elected members, Bracken became Premier of Manitoba, then the Progressive party, and later the Liberal-Progressive party. In 1942, he became leader of the federal Conservatives - after agreed to add "Progressive" to the party name. He did not seek a seat until three years later, at which time the party was defeated. Bracken served as a leader of the opposition until 1948, then retired to his farm in Manotick, Ontario where he raised Jerseys and palominos and grew alfalfa. He later served Prime Minister John Diefenbaker as "Box-Car Commissioner" to help in the movement of grain and from 1959 to 1962 sat on the National Capital Commission.