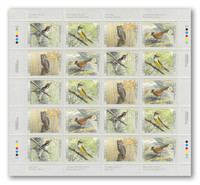 They are perhaps nature's most wonderful creatures perched high atop mountains or hidden deep within dense forest: the birds of Canada The celebration of these winged wonders continues with four new Birds of Canada stamps and two exquisitely designed pre-stamped envelopes. This year's issue captures the beauty of four birds: the great crested flycatcher, the Eastern Screech-owl, the gray-crowned rosy-finch and the hairy woodpecker.

He sits near the top of a monstrous tree, a multicoloured little being - bright yellow belly, grey upper breast, olive brown upper parts, greyish brown wings and white wings bars. His short legs perched on a dead branch, silent and motionless, he awaits his prey. As an unknowing insect approaches, the great crested flycatcher (Myiarchus crinitus) meets it in the path, trapping the creature in his wide, flat bill. Victorious, he returns to his roots to devour his catch.

The flycatcher builds its nest in natural tree cavities or abandoned woodpecker holes, forming it with dry leaves, evergreen needles, hair, feathers, string, moss, and even use a snakeskin or two - to scare off predators. Rather than a melodious song, the flycatcher is characterized by a raucous call, usually heard high in the tree canopy. Males defend the roost, while the females incubate the eggs - four to eight eggs at a time, for 13 to 15 days. Once the fledglings are hatched, the fathers bring insects and small fruits back to the nest. Beetles, bees, wasps, flies, bugs, grasshoppers, crickets, butterflies, moths and spiders provide the main meals. Like all other flycatcher, they are migrants, wintering in southern Florida, central Mexico, Cuba, northern Columbia and Venezuela. After making the return trip north in early May, great crested flycatchers can be found in southeastern Saskatchewan, southern Manitoba, southern and southwestern Ontario, southwestern Quebec, southwestern New Brunswick and in a limited area of mainland Nova Scotia.