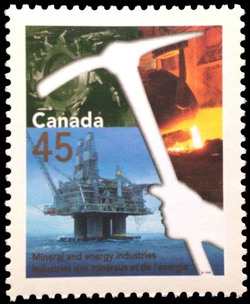 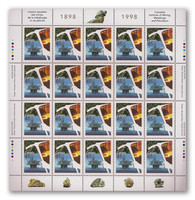 They were dark caverns, pits in which men toiled for hours, digging, burrowing, excavating to uncover valuable resources. They were the sites around which Canadian villages were erected, communities formed, railways were constructed and shipping ports were built: Canada's mines.

Recalling an industry that helped to shape our nation, Canada Post is pleased to release a single, domestic-rate commemorative stamp on May 4 on the occasion of the centenary of the Canadian Institute of Mining, Metallurgy and Petroleum.

Morien, Cape Breton was the site of one of the first Canadian mining projects in 1720. By the 1900s, the industry had spread across western Canada and into the northern Quebec and Ontario. Today, Canada is the world's largest producer of potash and uranium, and is a leading producer of natural gas, nickel, elemental sulphur, asbestos, cadmium, aluminium, platinum group metals, titanium concentrate, copper, gypsum, cobalt, gold, molybdenum, lead, and crude oil. The mining industry contributes significantly to the Canadian economy, operating approximately 300 mines - metal, non-metal, and coal - which employ about 300,000 Canadians.

Concurrent with Canada's early strides in mining were its first discoveries of petroleum. Though the country's initial triumphs took place in southwestern Ontario, today Alberta is the top Canadian producer of natural gas and crude oil. The Canadian Institute of Mining, Metallurgy and Petroleum was created one hundred years ago as a national association of mineral, metal, material and energy professionals in Canada. The Institute conducts studies, publishes technical papers, arranges conferences and courses, and maintains close ties with government departments. It has more than 12,000 national members who work in industry, government and academia, as well as 10,000 other individual members and 200 corporate members.

The stamp is a handsome collage that blends background images of mineral and petroleum excavation with the bold silhouette of a miner's pick in the foreground.