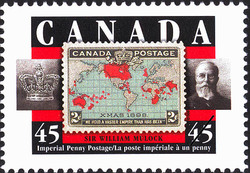 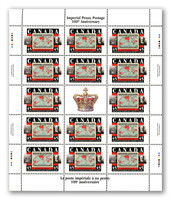 It was a momentous time in postal history; one hundred years ago, imperial penny postage was introduced, allowing Canadians to send letters anywhere in the British Empire at the rate of one British penny - just two cents Canadian! It was a huge triumph for Canada. Postmaster General Sir William Mulock played a pivotal role in negotiating this change from the previous levy of five Canadian cents.

The penny-postage stamp is one of the most revered by collectors. It was the world's first Christmas issue. The stamp featured a collage of Queen Victoria's crown, a map of the world with the British Empire displayed in red, "Xmas 1898" and the phrase, "We hold a vaster empire than has been". Produced in three colours and by two different processes by the American Bank Note Company of Ottawa, it was the most expensive issue in Canadian philatelic history to that date.

Recognizing the significance of the stamp for collectors, Canada Post will issue a single domestic-rate stamp. Queen Victoria's crown, a portrait of Postmaster General Sir William Mulock, and a reproduction of the original stamp are together depicted against a dark backdrop with "Canada" boldly displayed. Designed by François Dallaire of Montreal, this commemorative stamp will be released May 29 in Hamilton, Ontario. For collectors who may only have dreamed of having an authentic penny stamp in their private collections, this new issue may be an affordable consolation.

Based on a photograph by William James Topley.