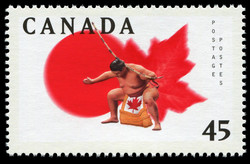 The hidden date for this stamp can be found in the red maple leaf.

The selvedge connecting two stamps in the pane can be seen in the following image. Clad in loincloths, confined within a ring, they face off. They squat, they charge. With speed, weight and strength, each tries to force his opponent from the ring or down to the clay floor. Within five minutes it's all over. Actual fighting time? Only seconds - the balance of time spent to psyche up for the charge. That's the spectacle of sumo.

Thousands of Canadian spectators will fill an auditorium to watch these sumo wrestlers face off, June 6-7, 1998. This year, Vancouver will play host to the first ever sumo basho - tournament - to be held in Canada. In commemoration, Canada Post will issue two domestic-rate stamps.

Sumo is Japanese wrestling played in a ring, or dohyo - a ring which, unlike North American wrestling, is not bound by ropes. A wrestler loses if he either forced out of the ring, or if he touches the ground with any part of the body other than the soles of his feet. Six bashos are held annually in Japan, each consisting of 15 days of bouts. The top-ranked wrestlers, or rikishi, compete for live audiences and 30 million TV viewers across Japan. Only nine bashos have been held outside the country.

Traditionally sumo wrestlers were recruited from military and lower-income groups but today graduation from junior high school is a prerequisite; in fact, many sumo athletes are drawn from college clubs. Minimum height is about 173 cm (5'8"), minimum weight is 165 pounds (75 kg). The smallest known rikishi weighs 220 pounds (100 kg) and the largest 490 pounds (222 kg). With a demanding physical regime, not to mention hearty appetites, comes the need for ample nourishment. At lunch hour, rikishi sit down to a generous meal of meat, fish and vegetable stew with beer and sake - followed by a compulsory afternoon nap.

Sumo is an ancient tradition that can be traced back 1500 years. Many of its rituals have been carried on through the centuries and are still featured in modern bouts. Referees, gyoji, wear court clothing of Heian Period (794-1185) complete with a black lacquered hat and a lacquered paddle used as a pointer. Drummers in period costume sit atop 16-metre towers beating out a gathering signal in the mornings. The ring floor, constructed from 15 tons of clay, is purified before the ceremony. Dressed as a Shinto priest, the chief referee places offerings of seaweed, dried squid, rice and nuts into a hole in the ring's center. When contestants climb in, they perform a cleansing ritual which concludes with the casting of salt. All rikishi wear their hair long and tied in a top-knot tail. When they retire, the knot is severed. Top-ranked wrestlers are presented with kesho mawashi - highly decorated silk aprons worth anywhere from few thousand to one million dollars!

The stamp design blends Japan's national symbol of the rising sun with the Canadian maple leaf and images of rikishi. This one displays the ceremony of the sport. A motion blur has been applied to both the Japanese and Canadian symbols to reflect the speed and power of this ancient sport.

Designed by Gerry Takeuchi Based on an illustration by Stephen Dittberner