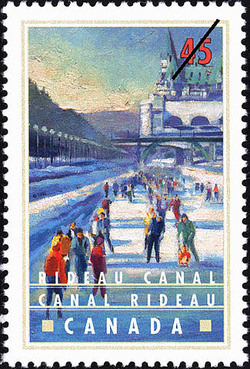 Like arteries of the human body, Canada's canals have carried the lifeblood of our nation. They were built on and around the inland waterways along which our forefathers travelled - European explorers, fur traders, settlers, immigrants - and along which villages were built and communities were formed. Though used primarily for recreation today, Canada's canals were originally constructed as artificial watercourses for inland navigation - built as improvements to the natural waterways for embanking, straightening, dredging or overcoming levelling differences. This stamp set features six of Canada's canals, a waterway and a lock.

Built by the British Army's Royal Engineers, the Rideau Canal system is part of an alternate water route from Montreal to Kingston, created in the 19th century to enable British ships to avoid sailing near American guns situated on the New York side of the St. Lawrence River. It was Lt. Col. John By who was given the task of constructing this elaborate waterway. The outcome was an outstanding display of civil engineering. Over five summers, some 2,000 men built 52 dams and 47 locks - spanning a distance of about 200 kilometres. Though never used for military purposes, the Rideau Canal opened the area to settlement and served as a commercial route well into the twentieth century. Today, it is enjoyed by numerous recreational boaters and skaters.