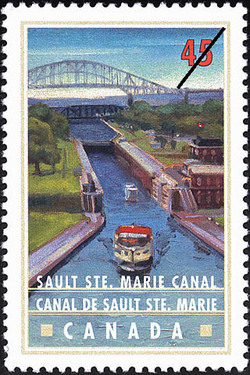 Like arteries of the human body, Canada's canals have carried the lifeblood of our nation. They were built on and around the inland waterways along which our forefathers travelled - European explorers, fur traders, settlers, immigrants - and along which villages were built and communities were formed. Though used primarily for recreation today, Canada's canals were originally constructed as artificial watercourses for inland navigation - built as improvements to the natural waterways for embanking, straightening, dredging or overcoming levelling differences. This stamp set features six of Canada's canals, a waterway and a lock.

The Sault Ste. Marie Canal, or Soo Canal as it is more commonly known, is the final link in an all-Canadian water route extending from the Atlantic to the head of Lake Superior. It was built to help ships overcome the rapid-infested St. Marys River. Until its construction, oxen had the task of hauling canoes and boats through the rapids. The first canal was built in 1798, but it was destroyed by Americans in the War of 1812. A new canal was constructed in the late 1800s. The Soo Canal was the world's first inland waterway with an electrically powered lock, and it was the first one equipped with a self-contained power plant to operate lights along its length. The Soo Canal closed in 1987 due to structural problems.