Portrait of an Officer in Working Uniform, Fingerprint Technician and a Royal Canadian Mounted Police, Helicopter

The horsemen on this stamp continue through the selvedge and onto an adjacent stamp. 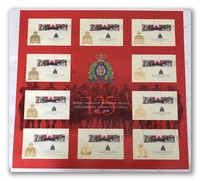 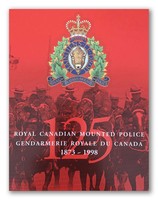 The Canadian Mountie is probably the symbol of Canada most recognized by individuals around the world, more so even than the maple leaf. The Mounties' scarlet tunic and flat-brimmed Stetson have become national icons, and the officers behind the uniforms have become celebrated defenders of our vast country. To celebrate the 125th anniversary of this most revered Canadian institution, Canada Post is issuing a set of two domestic-rate commemorative stamps.

The North-West Mounted Police (NWMP) was created in 1873 in Ottawa to establish law and order on Canada's western plains. This para-military body's duties included stopping liquor traffic among the natives, collecting customs dues and performing all traditional duties of a police force. The NWMP began with only 150 recruits, men from all walks of life. Some came from military circles, others were clerks, tradesmen, farmers, sailors, lumberjacks, bakers, butchers and university students.

NWMP posts sprung up throughout the west. Officers were successful at fostering friendly relations with the Natives and eliminating the lawlessness that had been rampant. They became allies of the Natives, assisting them with preparation for treaty negotiations and medicating conflicts with new settlers. Their battle against liquor trafficking climaxed in 1874 with the famed March West. Six NWMP troops equipped with artillery, oxen, cattle, horses and agricultural equipment set out for Fort Whoop-Up, a notorious stronghold of the whiskey traders. They successfully located the fort, but only to discover that the traders had fled. By the late 1800s, The Mounties had taken on many duties of civil authority beyond policing; they acted as mail carriers, customs collectors, Indian agents and census takers. By 1914, over a million people had moved to the Prairies, and the NWMP became land agents, immigration and welfare officials, and agricultural advisors.

When gold fever struck the Yukon in the 1890s, the Mounties presence ensured that the Klondike Gold Rush remained orderly. Officers took on the added roles of magistrates, coroners, and mining recorders. Their involvement ensured strict enforcement of the regulations and prevented unprepared prospectors from dying of starvation or exposure to the elements. In 1920, the NWMP merged with the Dominion Police, a federal force formed in 1868 to guard government buildings and enforce federal statutes. Dubbed the Royal Canadian Mounted Police, it was given responsibility for enforcing federal laws across Canada, and its headquarters moved to Ottawa. Shortly afterward, the force became involved in high-level security and intelligence work.

Now 125 years old and 15,000 members strong, the RCMP provides provincial policing services in all but two provinces (Quebec and Ontario). It continues to play a vital role enforcing Canadian law. Intelligence operations have moved to Canadian Security Intelligence Service (CSIS), but the RCMP maintains responsibility for enforcing federal statutes and dealing with infractions of the Customs and Excise Acts. The force is involved with combating organized crime, narcotics trafficking, and commercial fraud. Though they have abandoned their red coats and Stetsons for more modern dress, the historic uniforms are still donned by Mounties for ceremonial purposes and for duty on Parliament Hill. Training in horsemanship is another tradition that has been dropped from recruit training, but the red-coated male and female officers can be seen mounted on magnificent black horses in the famed Musical Ride.

Designed by Robert Peters of Circle Design of Winnipeg, The Canada Post RCMP stamp set contrasts the Mounted Police Force of yesteryear with the face of the RCMP today. The second stamp shows a modern-day image of an RCMP employee at work at a computer terminal. Together these images give a sense of longstanding position the RCMP has held in our society. These 1998 stamps are the latest honouring the RCMP. Previously issued were the 1935 Constable on Horseback, also the 1973 Musical Ride and the 1982 Stamp on Stamp. The stamps will be released July 3, 1998.