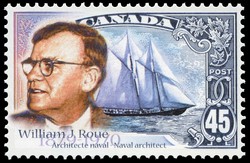 From a very young age, William James Roué amused himself by sailing bits of wood and shingles in gutters and drawing pictures of yachts - childhood hobbies which foreshadowed a career that would bring him national fame. That young boy went on to design the most renowned fishing craft in Canadian history: the Bluenose.

Weighing in at 154 tons, the schooner was launched at Lunenburg, Nova Scotia, over 75 years ago. The vessel was commissioned by Nova Scotians in the hopes of redeeming Canada's loss to the U.S. in the 1920 International Fisherman's Race. The Maritimers were determined to win the trophy for Canada in the 1921 contest. To meet the challenge, they needed to build a salt banker with the speed of a fresh fisherman vessel, and the province insisted that the design come from home.

Though his experience was that of a yacht designer, Roué, a self-taught naval architect, conceived and realized a remarkable design. In 1921, Canada won the International Fisherman's Race, and Roué was rewarded with a gold watch and commemorative scroll. Now, in commemoration of its own, Canada Post is releasing the William Roué domestic-rate stamp designed by Louis Hébert of Montreal.

As a child, little did he know than that he would become the greatest designer of wooden vessels in Canadian history, and one of the most talented in the world. As an adolescent, Roué progressed to making and sailing 1.5-metre model boats and, once he was old enough, learned to crew at the Royal Nova Scotia Yacht Squadron (RNSYS). He spent winter months in the library of the Yacht Squadron devouring volumes on boat design. He enrolled in classes in mechanical drafting at the Victoria College of Art and Design, now the Nova Scotia College of Art and Design.

Roué was frequently called upon to design yachts for fellow members of the Squadron while he worked in the family soft-drink business. In his lifetime, Roué created more than 100 designs for commercial vessels, including two fleets of freighters for Newfoundland and the Arctic and a number of ferries. Roué passed away in 1970 at the age of 90.

Canada's most celebrated vessel was named for Nova Scotians, called "Bluenosers", a name some believe was given to the crewmen of schooners that carried blue-skinned Nova Scotia potatoes to Boston in the late eighteenth century. Built by Smith and Rhuland and commanded by Captain Angus J. Walters, the Bluenose sailed to victory in the Halifax Herald International Fisherman's competition in 1921, 1922, 1923, 1931 and 1938, and held the record for the largest catch of fish ever brought into Lunenburg. It was sold in 1942 to a West Indian trading company. Four years later, the ship was wrecked off Haiti. An exact replica, named the Bluenose II was launched in 1963. More than a decade later, the owners turned it over to the Province of Nova Scotia and it became a seaborne ambassador. To this day, it continues to sail the North Atlantic.

Over the past decades, the Bluenose has been features on three stamps: a 1929 50-cent issue, a 1982 60-cent stamp that commemorated the International Philatelic Youth Exhibition, and a 1988 37-cent issue that celebrated Bluenose skipper Angus Walters. The 1929 Bluenose stamp is the most famous of Canadian stamps, recognized around the world.