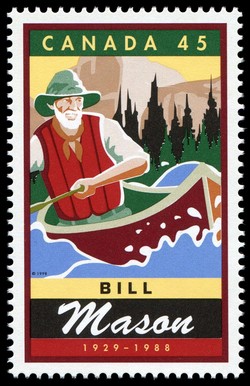 We all know of Norman Bethune, Lucy Maud Montgomery, Billy Bishop and Terry Fox, but many of the greatest legendary figures in Canadian history are not household names everywhere. In August of this year, Canada Post is helping to change that by issuing a series of domestic-rate stamps which puts the spotlight on four worthy Canadians who have made their mark on our culture and our identity.

There's no question that William Clifford Mason (1929-1988) was the most successful filmmaker in the history of the National Film Board of Canada. During his career, Mason created 18 spectacular films, attracting huge audiences and earning some 60 honours including two British Academy Awards and two nominations for an Oscar. Mason's films were borrowed, purchased and seen by more people than those films of any other NFB filmmaker. "His Cry of the Wild" which opened in New York City in 1974 was a hit, outgrossing "Papillon", "The Sting", "American Graffiti" and even "The Godfather" in its first week. "Quill and Quire" called this Canadian canoe enthusiast "a symbol of the joy of the wild to an entire generation". In a career that brought nature to the screens of the world, Mason created 18 films, among them "Paddle to the Sea", "Death of a Legend" and "Path of the Paddle".

Designers Catharine Bradbury and Dean Bartsch of Bradbury Design in Regina say these new stamps embrace an illustration style that "ties the four legendary Canadians together while being visually strong in the stamps' actual size". The designers attempted to echo the feel and impact of the great posters of the 1930s, and believe that the extraordinary lives of Mason, Foster, Munday and Comeau are now reflected in a design that is appropriately nostalgic while staying visually bold.

Designed by Catharine Bradbury. Based on an illustration by Dean Bartsch.