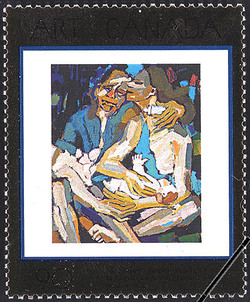 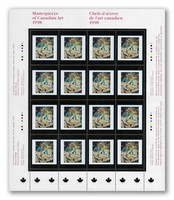 Continuing the celebrated stamp series begun a decade ago, Canada Post is thrilled to release the 1998 Masterpieces of Canadian Art issue. Featuring Bruno Bobak's 1970 oil painting "The Farmer's Family", this international-rate stamp captures the affection and strength of the rural Canadian family. The Farmer's Family is the centre panel of an expressionist triptych created by Bobak. It presents a farmer and his wife in a warm embrace. In the full triptych, this portrait is juxtaposed against an initial image of the farmer with his hogs, and a third portrait of the farmer's children.

Polish-born, Bobak immigrated to Canada early in life and became fascinated with Canadian rural life. "It was so foreign to the urban lifestyle I grew up with and yet it was so complete: a self-contained world of survival, unity and tenderness", he said. "Bobak's work is not an illustration of an actual event or an actual place, but a symbol of survival in a cold and rugged country", says Curtis J. Collins, curator of the Beaverbrook Art Gallery in New Brunswick where the painting now hangs.

Bruno Bobak came to Canada, to Saskatchewan, in 1925. He soon moved to Hamilton, Ontario and eventually settled in Toronto in 1935. He enrolled in Saturday morning classes at the Art Gallery of Toronto where he studied under Group-of-Seven artist Arthur Lismer. Following high school, Bobak enlisted in the army and, after winning first prize in Canadian Army Art Competition, was named as an Official War Artist. After military service in Europe, he married fellow war artist Molly Lamb and in 1947 took up duties as an instructor at the Vancouver School of Art. Bobak was later appointed Director of the University of New Brunswick's Art Centre. Still active today in his adopted maritime province, this recipient of the Order of Canada has contributed his talents to fundraising programs such as the Atlantic Salmon Federation, Ducks Unlimited, The Glenbow Museum, St. Francis Xavier University and the University of New Brunswick's Faculty of Law.

While the first five stamps in the Masterpieces series appeared framed in silver foil and the subsequent five in gold, this eleventh instalment appears framed in platinum. Designed by Pierre-Yves Pelletier, the Bobak stamp will be issued September 8 in Fredericton, New Brunswick.

Designed by Pierre-Yves Pelletier. Based on a painting by Brunislaw Jacob Bobak.