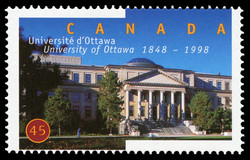 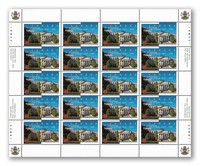 It is the oldest and largest bilingual university in North America, founded 150 years ago. Today the University of Ottawa is recognized around the globe as a centre of academic excellence. To pay tribute to this Canadian institution, Canada Post will issue a commemorative, domestic-rate stamp this fall.

The University of Ottawa was founded in 1848 by the Oblate Fathers as the College of Bytown, a small Catholic school with 60 students. Twenty years later, it gained university status. Staffed mainly by Oblates until the early 1930s, the university today has only a few clergymen as part of its full-time faculty. Since 1965, when the university became a provincially funded institution, the school has been non-denominational. Now with an annual enrollment of more than 25,000 students, U of O (as it is affectionately called) has become a vibrant centre of learning and an important contributor to the cultural and economic development of Canada's National Capital Region. Distinct in its bilingual character, the university strives to develop and maintain the widest possible range of teaching and research programs in both French and English. The school has earned international recognition as the hub where several research breakthroughs have been made, including the isolation and identification of the defective gene that causes myotonic muscular dystrophy. The work of the University of Ottawa Heart Institute and the research conducted at the Neuroscience Research Institute are also well known around the world.

Located in the National Capital region, the university offers its students access to a plethora of resources - government department and agencies, laboratories and libraries, foreign embassies and high commissions. Because Ottawa is also the capital of the advanced technology industry, the university has been able to forge links with leading corporations and expand its cooperative-education offerings. The university's distance-education initiatives have been added an important dimension to instruction, allowing francophones from across Ontario to participate in undergraduate and graduate courses. Internationally, more than 100 bilateral agreements with governments, research institutes and universities throughout the world have given the University of Ottawa access to scholarships, and to both student and faculty exchanges.

Designed by Harris Design Associates of Toronto, the University of Ottawa commemorative stamp features an image of Tabaret Hall, the university's administration building, named for one of its first, and most influential administrators, Father Joseph-Henri Tabaret. To capture the essence of campus life, the designers used a highly chromatic photograph of Tabaret Hall taken by photographer Michael Rafelson that captures the late afternoon light on an early-autumn day - the start of a new school year. The school's coat of arms' colours - maroon and gold - are incorporated into the stamp's denomination. Its coat of arms is illustrated in the four corners of the pane selvage - two open books representing teaching and research, fleurs-de-lys trilliums, and two silver horses - symbols of dignity, wisdom and spirit, and of the university's tradition of excellence in sports. The stamp will be issued September 25 in Ottawa.

Based on a photograph by Michael Rafelson.