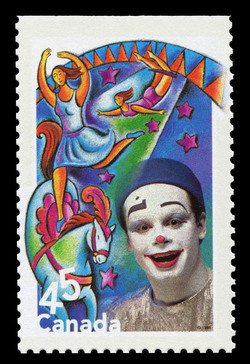 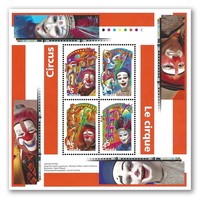 Fire eaters, clowns, elephants and tigers - all form part of the colourful history of the circus in Canada. This popular form of family entertainment emerged hundreds of years ago, as a blending of the menageries and performing troupes earlier popular in Europe.

This October, in conjunction with Stamp Collecting Month, Canada Post will launch the Circus set of four domestic-rate stamps. The circus as we know has its roots in antiquity. The Roman "circus", Latin for "circle", was modelled after the Greek hippodrome where spectators gathered in tiers around a central arena to watch chariot races and gladiator fights. The modern circus was created in the 18th-century England by Philip Astley. A retired sergeant major, Astley was a trick horseback rider who discovered that centrifugal force would help keep him standing on a horse's back if he galloped in a circle. Astley applied this discovery to circus shows, and moved displays of horsemanship from a rectangular stage to a ring. Though rope-dancers, acrobats and jugglers were soon added to the modern circus, horsemanship continued to be the focus for over 80 years.

The first North American circuses were staged in Philadelphia and New York City. Though in Europe circuses had typically been housed in permanent buildings, the vast geography of North America spurred the emergence of travelling shows transported by horse and wagon. Wild animal acts were than added and by 1900, flying trapeze and other acrobatics became standard features. The first recorded Canadian circus performance was staged in Montreal in 1797. It was such a resounding success that a permanent venue was constructed to accommodate daily performances. The popularity of the circus in Canada ballooned from there. Of its colourful performers, William Leonard Hunt of Bowmanville, Ontario was probably the most popular. Known to his audiences by his exotic pseudonym "Guillermo Antonio Farini", Hunt toured as an acrobat and tight-rope walker. In the 1860s, he performed high-wire acts over Niagara Falls and toured with major American circuses such as P.T. Barnum's.

William Harris of Cooksville was another Canadian who made it big in the circus world. His Nickel Plate Circus, named for its new and shiny appearance, became one of the most successful small railway circuses to tour North America.

A travelling tent show with few of the traditional human performances was pioneered by Alpheus George Barnes Stonehouse of Lobo, Ontario. He began in 1895 with one pony, a phonograph, and an early motion picture projector, and 10 years later, had trained a full troupe of wild and domestic animals to perform at fairs and exhibitions.

As the 20th century dawned, what came to be known as the Golden Age of the circus was underway. During this era, many thrilling circus shows were conceived, including Buffalo Bill's Wild West, and Ringling Brothers, Barnum and Bailey, all of which travelled by rail. Inventors of the popular three-ring circus, Barnum and Bailey required a full 65 cars to move their show from one town to the next. Circus parades also gained popularity with North American audiences at this time. Some measured over three kilometres in length and featured hundreds of clowns, bands, intricately carved wagons, and caged and harnessed animals. Though the introduction of automobiles and increases in railway costs brought about the decline of railway circuses, and while circus parades lost their broad appeal over time, the permanent circus has persisted as a popular form of entertainment with children and adults across Canada. The 50-year-old Garden Brothers Circus performs 50 shows per season, and Cirque du Soleil brings audiences to its locations worldwide.

Begun in 1982 by a group of Quebec buskers, the Cirque du Soleil has a troupe of performers still predominantly Canadian, though some are recruited from around the world. The main performance site is Las Vegas, Nevada, and a new contract was recently signed with Disney World in Orlando, Florida.

Designed by Sophie Lafortune and Monique Dufour of Quebec, the Canada Post Circus set could be the most popular issue of this year. Its colourful photos of clowns and background illustrations of circus scenes are sure to appeal to young, budding philatelists. At the same time, the poetic touch that Paule Thibault's illustrations lend to these issues will appeal to discerning, seasoned philatelists as a festive addition to any collection. And their subject matter will rekindle fond memories of childhood days spent under the big top. The Circus stamps will be available in booklets of 12. They will be issued October 1st to kick off Stamp Collecting Month. Souvenir sheets of four stamps will also be available, sponsored by Via Rail.